E is for Wyatt Earp & Every Helpful Link I Could Find

Yeah, so I had to stretch for the helpful links portion of the title. What can I say??

I'm going to list a few helpful links for writers and then I'll launch into Wyatt Earp's story.

This past month's Pikes Peak Writer's Write Brain workshop for writers is available for free online! You do not have to be a member of Pikes Peak Writers to enjoy this informative MP3 file entitled Wearing Many Hats, presented by Jodi Thomas. Click on that link and look to the right on that page for the link for the actual recording. It is underneath the green Resources box (not in it).

Are you devious at heart? Like writing flash fiction or want to try your hand at it? The Pen Women Flash Fiction Contest is still on, deadline May 1. First prize is $100, Second is $50, Third is $25. Entry is $10.

The Hysterectomy Association is having a Short Story and Poetry Contest for female writers. Click the link for more details.

The Write Practice is having a Show Off Writing Contest. The winner will receive help polishing the story. There is a new competition each month with a different theme (this month's theme is "spring" with a deadline of April 9). Each month's winner will also be part of an anthology at the end of the 12 months. I did not see mention of pay, but I merely scanned. 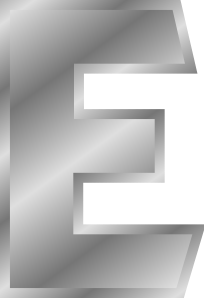 The Earp Brothers, sons of Nicholas Porter Earp, a justice of the peace, were James, Virgil, Wyatt, Morgan and Warren, I believe in that order. They also had three sisters, Martha, Virginia and Adelia; one older half-brother, Newton; and a half-sister who died before they were born (she was 10 months old), Mariah. Nicholas was a busy man, if you know what I mean...

I had originally intended to cover all the Earp brothers, but good heavens, do you see how many of them there are? There's no way for me to do these guys justice in such a short format, so I will just try to cover the most famous (infamous?) of these guys: Wyatt Earp.

Prepare to be surprised...I may burst some bubbles.

Wyatt Berry Stapp Earp (yikes) was born March 19, 1848 in Monmouth, IL. The Earp family moved around the country for years, even as far as California, before ending up in Lamar, Missouri in 1869. During that time, Wyatt worked as a rancher on the family farm, an assistant stage coach driver, a teamster, and he helped with the material transport and building of the Union Pacific Railroad. In November 1869, twenty-one year old Wyatt took over the position of constable for the town of Lamar from his father. He was officially a lawman.

Wyatt got married on January 10, 1870 to a woman named Urilla Sutherland. Unfortunately, she died sometime later that year of Typhoid fever; she was pregnant. Earp fled the state sometime in 1871, several legal charges having been filed against him accusing him of embezzlement and falsifying court documents during his time as constable. That year he was also accused of horse theft in Indian Country, and was taken into legal custody to be tried. He escaped jail by climbing through the roof (boy, jails sure weren't well built back then) and fled again, eventually ending up in Peoria, IL, where he became a pimp. 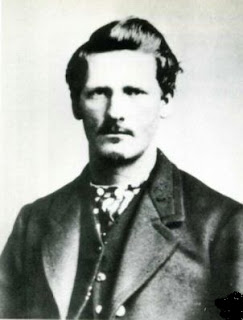 Are you wondering whether you read that correctly? I said A PIMP!

Yep, Wyatt and his little brother, Morgan, were arrested in a brothel on February 24, 1872. They were fined then set free. A few months later, the two were arrested again, this time in a different brothel. They were fined and had to sit in jail because they couldn't afford to pay. Shortly thereafter, Wyatt started pimping on the Beardstown Gunboat, a brothel on a ship. That's right, he was a floating pimp. Actually, some data claims he owned this boat, but I can't say for sure what's true.

He was arrested and fined twice more due to his services as a pimp on the Beardstown Gunboat. He also earned the name "The Peoria Bummer" in the newspapers of the day.

Perhaps it was this last arrest and fine, which landed him in infamy in the papers, but Earp moved on to Wichita, KS, first serving as a private "collections" man to get some money back for someone. He then became a member of the Wichita police force on April 21, 1875. Apparently, news of Wyatt hadn't spread all the way to Wichita!

He was removed from the police force in 1876 after an altercation with a rival of his boss's. His boss continued to employ him sort of under the table until Wyatt was once again accused of embezzling.

So what happened? Was he severely punished? Arrested? Horse whipped? 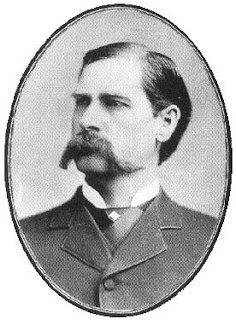 He came and went from the Dodge City police force between the years of 1876 and 1879, being rehired each time he returned from wherever he had wandered. It is claimed by some that he was hunting buffalo during those breaks. He worked with Bat Masterson a lot during this time, and they were good friends. By the time he left Dodge City in 1879, heading west, he was a well respected lawman, his past crimes forgotten.

Wyatt Earp finally came to Tombstone, Arizona in 1879, accompanied by a woman named Mattie Blaylock (real name Celia Ann), who he claimed as his common-law spouse. His brothers James, Virgil and Morgan all joined him with their families, and they began to stake mining claims. At some point, Virgil became a U.S. Deputy Marshal, and often roped his brothers into helping him. During this time, Wyatt served as a shotgun messenger for Wells Fargo, protecting the cargo on their stagecoaches. On July 27, 1880, Wyatt Earp was appointed a Deputy Sheriff of Pima County. He received many accolades from the press over the years, and was, again, a highly respected lawman.

Wyatt had major conflicts with Johnny Behan, who eventually became sheriff of the area. They were both attracted to the same woman, actress Josephine Sarah Marcus. Behan had a relationship with her first, but she kicked him out when she discovered him cheating. She and Wyatt hooked up, despite the fact that he had claimed Mattie as his common-law wife.

Later, Wyatt and Behan competed for the sheriff's role. Due to political issues, Behan became sheriff. He promised under-sheriff to Wyatt, but didn't follow up, instead appointing another man to the role.

No longer a lawman, Wyatt was hired to be an enforcer at a saloon, and given shares. He continued riding in sheriff's posses to catch stagecoach robbers and troublemakers, which landed him in the ill sights of the McLaury brothers and the Cowboys. Things continued to escalate until the incidents that led up to the fight at the O.K. Corral, which I wrote about yesterday under Doc Holliday. It should be noted that Ike Clanton told a very different story than Wyatt and his friend and brothers: click HERE to read the other side.

After the O.K. Corral incident, the Earps and Doc made their way through New Mexico and Colorado, ultimately finding themselves in Gunnison, CO. He took the actress Josephine as his common-law wife, having left Mattie behind in Tombstone. They were together the rest of their lives. Wyatt worked as a Faro dealer, owned several saloons, and continued to attempt mining. In 1884, Wyatt once again took on the cloak of a lawman, becoming a sheriff in Kootenai County, Idaho. In 1885, he left and went after gold in San Diego, CA. There, he juggled real estate, opening saloons and running them. He also became a gambler and started investing in racehorses. 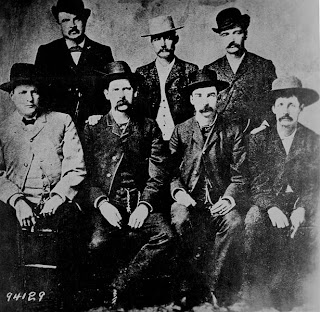 In 1897, having traveled a bit more around California, Wyatt and Josephine went up to Alaska during the Klondike Gold Rush, once again opening a saloon in his city of residence. They continued chasing gold back in California and Nevada. In 1910, Wyatt began working as a bounty hunter, of sorts, for the Los Angeles Police Department until being involved in a dispute that became the Pot Ash Wars, which he was not further involved in. He moved to Hollywood and became a film consultant on Westerns. This he did until his death on January 13, 1929, age 80, of chronic cystitis, now believed to have been prostate cancer.

1. Wyatt Earp met a young John Wayne, who based many of his characters on the old lawman.

2. Earp was the last gunfighter from the O.K. Corral to die.

3. He was never shot. Shot at, yes, but no bullet ever hit its mark.

4. He met author Jack London while in Alaska.

5. His father was convicted of bootlegging in 1859.

6. Wyatt was not a lawman during his participation at the O.K. Corral, though he was considered to be acting as an Assistant Marshal.

Did you know these things about Wyatt Earp, or did you think he was squeaky clean like the film Tombstone made him out to be? Any other helpful links to share?