S is for Belle Starr

Myra Maybelle ("Belle") Shirley was born February 5, 1848, in Carthage, Missouri. She was the only girl out of six kids. Her mother died when she was young, and her father married three more times, the final time to Eliza Hatfield (of the Hatfield vs. McCoy's clan). Belle's family raised animals and grew some crops, doing alright for themselves. Eventually, they sold their land and opened a series of business, including a tavern, an inn and a blacksmith shop.

They continued to prosper, and Belle was sent to the Carthage Female Academy for her schooling. This wouldn't last forever, though, as the Kansas-Missouri Border War broke out. Her big brother, Bud, joined Quantrill's Raiders, making her father proud. Bud was killed in 1864. Belle is rumored to have joined Quantrill's Raiders for a time as a spy, until her father moved the family down to Scyene, Texas to a smaller farm, suffering from the frequent raids by Union soldiers and Border Ruffians.

In 1866, Belle met the Cole-Younger Gang after a big robbery and began hanging out with them. The gang used the Shirley home as a hideout several times. One night, Jim Reed came with them (she'd known his family in Missouri) and they fell in love. They were married in November of 1866. They had a daughter in September 1868 and named her Rosie Lee. Soon, Reed became a wanted man; it was claimed he'd murdered the Shannon brothers, who had killed his brother, Scott. They picked up and moved to California, where they had a son, James Edwin.

In 1869, Belle became The Bandit Queen, a name that would stick once the newspapers began bandying it about. Belle began singing, dancing and playing the piano in saloons, and supposedly helped her husband steal and sell cattle. He was also known to have practiced counterfeiting and whiskey running. She and her husband had fun playing outlaw until Reed was killed by a Deputy Sheriff in August 1874. Belle left her children with her mom and took off to live the outlaw life to the fullest. She participated in robberies and looting, though there is no evidence that she ever killed anyone. 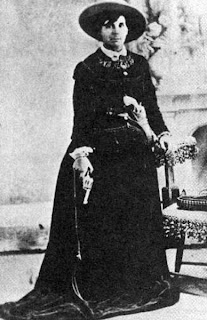 In 1878, she first married Bruce Younger, though she'd been in love with Cole Younger as a girl. That didn't last long, and she met Sam Starr, a Cherokee man. They were married and lived together in Oklahoma in 1880. The two of them gathered up a gang and started stealing horses and cattle, as well as making whiskey and selling it to local Natives. After years of trying to convict Belle Starr, Judge Isaac Parker finally nabbed her for stealing a horse. She served a year in prison then returned to her outlaw life, though she also briefly starred in a Wild West show...as a bandit.

In December 1886, her newest husband died in a gunfight. Three years later, she married Jim July Starr, who was fifteen years younger than her; this was the only way she could keep her land in Indian Territory. She was ambushed and shot in the back, face and neck on February 3, 1889, and police never discovered her killer. Had she lived two more days, she would have been 41.

Was it her husband, who was cheating with a Cherokee girl and had recently attempted to hire someone to kill her for $100, shouting that he'd do it himself if the other man wouldn't? Was it her son, who she had recently whipped? Was it her daughter, who she had stopped form marrying the man she loved? Or was it the neighbor she'd threatened to turn into the police? Perhaps it was one of her old outlaw pals? We'll never know.

My grandpa used to tell me about his days living on a farm in Oklahoma (he was Cherokee). The trail to Robber's Cave, which is now part of a state park, ran by their home. Robber's Cave was a hideout frequently used by The James-Younger Gang, as well as Belle Starr. She actually had a cabin just a short distance from the cave. Grandpa said everyone would go in their houses and pull the blinds when they heard the horses thundering their way. He was just a boy, though, and he'd go to the windows to peek to try to grab a glance at the Bandit Queen.

My grandpa used to take my mom and her brothers out to Robber's Cave State Park when they were kids and regale them with tales of the famous outlaws who drove their horses past his farm.

1. Belle Starr was known for being dressed impeccably in black satin, riding side saddle, with a fine hat, her pistols strapped to her hips.

2. It was the newspapers who dubbed her the Bandit Queen, comparing her to Robin Hood and Jesse James.

3. Her daughter's nickname was Pearl, which is what she went by for the rest of her life. She became a prostitute to get her brother out of jail for horse theft, and made such good money at it that she continued after he was out, opening her own bordellos. Her brother became a man of the law.

4. It was often rumored that Rosie Lee (Pearl) was the illegitimate child of Cole Younger, Belle's first true love.

5. The 1870 Census showed a third child with Belle and Jim Reed in California.