Teaser Tuesdays is a weekly bookish meme, hosted by MizB of Should be Reading. Anyone can play along! Just do the following:

1. Grab your current read
2. Open to a random page
3. Share two (2) “teaser” sentences from somewhere on that page
4. BE CAREFUL NOT TO INCLUDE SPOILERS! (make sure that what you share doesn’t give too much away! You don’t want to ruin the book for others!)
5. Share the title & author, too, so that other TT participants can add the book to their TBR Lists if they like your teasers!

"A quiet scene now rises before us. A large, roomy, neatly-painted kitchen, its yellow floor glossy and smooth, and without a particle of dust; a neat, well-blacked cooking-stove; rows of shining tin, suggestive of unmentionable good things to the appetite; glossy green wood chairs, old and firm; a small flag-bottomed rocking-chair, with a patch-work cushion in it, neatly contrived out of small pieces of different colored woollen goods, and a larger sized one, motherly and old, whose wide arms breathed hospitable invitation, seconded by the solicitation of its feather cushions, - a real comfortable, persuasive old chair, and worth, in the way of honest, homely enjoyment, a dozen of your plush or brochetelle drawing-room gentry; and in the chair, gently swaying back and forward, her eyes bent on some fine sewing, sat our old friend Eliza. Yes, there she is, paler and thinner than in her Kentucky home, with a world of quiet sorrow lying under the shadow of her long eyelashes, and marking the outline of her gentle mouth!" p. 116

The Utah War occurred between the Mormon (LDS) settlers in Utah Territory and the federal government in the form of the U.S. Military from May 1857 and July 1858. Before this time, the LDS community had been chased out of many homes, finally settling in the Salt Lake area of Utah Territory in 1847. They felt their only hope of surviving was to get a state run by their own religious leaders, thus keeping the federal government from stepping in. President Millard Fillmore allowed Brigham Young, a leader of the LDS Church, to govern Utah Territory, seeming to make both sides happy.

However, people around the nation were disturbed by some of the principles of the LDS community, such as their support of polygamy. In fact, opposing political parties were incorporating polygamy into their platforms at the time, along with slavery still occurring in the territories. The media sensationalized various differences represented by the LDS community, making people very afraid of this group of people they didn't understand. 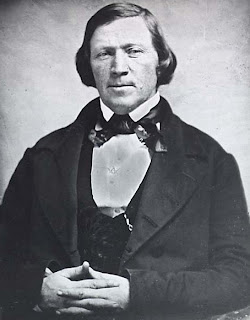 In addition to this, Brigham Young (right) was making sure to appoint various church members in positions of power throughout the territory. Rather than using a government legal system to resolve issues, they would deal with it in a religious setting, which was considered obstruction by the new president, James Buchanan. This is not to say that no non-LDS appointees were placed; the president was responsible for certain positions, which caused issues between various leaders in Utah Territory. The LDS community resented the government for their opinions on their lifestyle/practices, and many of the non-LDS appointees were heavily prejudiced against the Mormons. 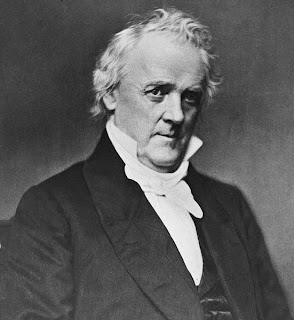 Unfortunately, president Buchanan (left) acted so hastily, out of fear, that he failed to notify Brigham Young of the change or of the fact that the military was not moving on them to attack. Instead, Young and his followers heard from the press that the military was coming for them. In response, Young recalled all of his people and brought those on the outskirts of the main community in to band together. They were to bring any resources and supplies they had, and to burn their homes in order to leave nothing behind for the incoming military.

When attempts to unite with the Native American population in the area failed, Young restarted the Nauvoo League, a militia who had fought for them in Illinois. He sent them out to harry the U.S. troops in whatever way possible, including burning areas around them, stealing from them, stampeding their animals and burning supply trains. As with the U.S. military, Young's fighters had been told not to draw first blood, and only to harm others to defend themselves.

This set the stage for a bloodless war. There were no battles that led to loss of life. However, there were several massacres perpetrated by LDS militiamen against people traveling through the area, as they believed they must be spies. About 150 people were killed in a series of massacres, including the Mountain Meadows Massacre of September 11, 1857, wherein 120 men, women and children were butchered. It had started out as an attempt to issue several small skirmishes to make it look like local Native Americans were attacking. However, when it got out that the wagon train was aware it was whites attacking them, their complete removal was ordered. Only seventeen children under the age of seven were spared. Those children were adopted by LDS families in the area.

Ultimately, Buchanan declared that the LDS members would be pardoned if they would meet with representatives of the U.S. government and agree to mediation. Upon agreement, Thomas Kane, who was respected by both sides and had helped Young and his people in the past, traveled to Utah Territory via ship through the Panama Canal (due to winter weather in the center of the U.S.) to arrive in Utah Territory. He and Young met and had what was considered a peaceful negotiation. The problem was that Young was perfectly willing to accept Cummings as the new leader, feeling God was behind said appointment, but he feared the military moving in and persecuting his people. President Buchanan finally convinced them that the military would serve only to protect from the Native population and to help travelers get through the territory to the west coast. The military made a point of setting up their base somewhat removed from the LDS population in the valley.

This war, though basically non-violent, caused Buchanan embarrassment, and left the area in poverty for quite some time. On the other hand, it seems an almost positive statement on the human condition, as both sides desperately wanted to avoid true bloodshed. Both thought they were defending against a larger threat than truly existed. Miscommunication was the true cause of this war, and the Pony Express was created after the war settled, aiding communication for a short time.

What are you reading? Ever heard of the Utah War? How about the Mountain Meadows Massacre?