THREE MORE DAYS OF THE A-to-Z!  Hang in there, everyone!

I wanted to pass along Deanna Knippling's Writer's Negativity Checklist , which I found quite interesting.

Fear and Trembling is a paying market, looking for horror flash fiction, short stories, and some novellas, poetry and artwork.  Their submission window closes April 30, so hurry!

The Journal of Compressed Creative Arts is taking flash fiction submissions of 600 words or less, and is a paying market.  Submission window closes in August, so you have a little more time for this one.  They accept fiction and creative non-fiction.

Yearning for Wonderland is hosting a flash fiction contest with the theme Unexpected Fairy Tales.  This closes April 29, eek, hurry!

This is the last week to get your flash fiction entries in for the Pikes Peak Branch, National League of American Pen Women Flash Fiction Contest.  The theme is Are you Devious at Heart?  May 1 is the deadline.  You can find details at that link or the tab at the top of my page. 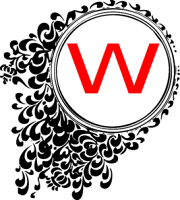 On May 27, 1837, James Butler Hickok (Wild Bill) was born in Troy Grove, IL.  He grew up on a farm with his four brothers and two sisters, a farm that happened to be a stop on the Underground Railroad (which automatically makes them aces in my book!)  Due to their involvement with abolition, his father was killed when Hickok was fourteen years old, forcing him to find work to support his family.  When he was eighteen, he became a stagecoach driver, heading west to the land he'd always dreamed of.

He was already quite a marksman, but this was put to the test as a stagecoach driver, with frequent robbery attempts.  In 1858, his coach broke down in Colorado (you knew I'd work it in there somewhere, right?)  As they were waiting for help, he took a nap in some bushes.  The passengers, who had remained in the stagecoach, heard a ruckus and ran out of the stagecoach to discover Hickok fighting a bear.  Though he was hurt, he won the battle, killing the bear with his knife. (An alternative story says the road was blocked by the bear, so he got down and shot it to scare away, but the bullet merely angered it.  They did battle, he shot it again, and then he was able to slit its throat.) His injuries caused him to have to rest up in Monticello, Kansas, where he was asked to be a police officer.  He didn't do this long before he began working for the Pony Express out of Nebraska. 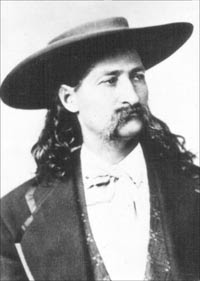 In 1861, a man named David McCanles got into an altercation with Hickok, which involved his son and two other friends.  McCanles' son was the only survivor, thanks to Hickok being a crack shot.  This was proven as self defense, and he moved on to Missouri, where he signed on with the Union Army on October 30 as a scout.  This is the point at which he earned the name Wild Bill.

He received an injury while fighting an Indian in the war, and left the Army.  He went to Hays City, Kansas, where he was sworn in as sheriff in 1869.  During his time as sheriff, he killed three men, giving up his position after a fight with several Cavalry men who attacked him in a saloon.  He killed one, injured another, and he was done with Hays City.

In 1871 he became City Marshal for Abilene, Kansas.  He took to hanging out with the infamous John Wesley Hardin, treating him almost like a son.  Their friendship was ruined one night when Hardin woke up in a hotel, thanks to someone snoring loudly in another room, and fired through the wall, killing the other man.  He jumped out the window and hightailed it out of town, knowing full-well Hickok could take him out.

For whatever reason, Hickok started focusing less on his police work and more on gambling, drinking and prostitutes.  On October 5, 1871, Hickok responded to gunshots in town.  He ran into a man named Coe, who claimed he'd been shooting at a dog.  When Hickok told him there were no guns allowed in town, Coe took a shot at him (it should be mentioned that they were also courting the same woman, so who knows what transpired).  Hickok fired back, shooting Coe in the stomach.  Footsteps sounded behind him, and Hickok turned and fired, killing his deputy.  The city of Abilene forced him out of his position and asked him to leave.

He tried to form his own theater company, but his first show in Niagara Falls was a massive failure that ended in a buffalo stampede, and he was forced to sell his buffalo to send his actors home.  Buffalo Bill Cody, an old friend of his, brought him into his show for a bit, but he wasn't happy there, so he left in 1874.

In 1875 he married a woman who had patiently waited for him for quite some time.  A month after their marriage, he left her behind to go look for gold.  He became fast friends with Calamity Jane, who later claimed they were together.  This claim was not supported, however.  He never got his gold stake, instead falling back into drinking and gambling.  His drunkenness kept him from being a good gambler, and he was arrested repeatedly on vagrancy charges.

One night, he beat a man named McCall soundly.  He felt sorry for the guy, so he gave him enough money to buy some dinner.  When he came in to gamble the next day, August 2, 1876, McCall snuck up behind him and shot him in the back of his head.  Coward.  The hand he was holding, two 8's and two Aces, became known as the Dead Man's Hand.  McCall was tried and found innocent in that town (Deadwood, Dakota Territory), but his sentence was declared unlawful due to Deadwood being Indian Territory at the time, so he was tried again in Yankton, South Dakota after traveling all over bragging about having killed the famous gunslinger.  He was found guilty and hanged March 1, 1877.

His wife never saw him again, but he had sent her a letter professing his love, which she received after his death.  Calamity Jane claimed him as the love of her life, and was later buried next to him.

My research on Hickok turned up some greatly varied information, so I pretty much went with anything that disagreed with Wikipedia (haha).  Actually, I always try to have at least three sources for these posts, and I go with the information that appears to be the most consistent.  This time, that was against Wikipedia's information.  It was claimed that he was a Jayhawker (the vigilante army that defied Quantrill's Bushwacker's.  I only found this in one place, and could not confirm it.  It was also claimed he was an Indian hater in one spot, but that was not confirmed anywhere else, either, and I'd prefer to not believe it.  Sigh.  There was a lot of other disparate information, which causes me to believe that the sensationlistic Penny Dreadful details have been well and truly mixed in with his information, and the truth is probably pretty filled in with fabled details.

<b>Have you heard information that was opposite any of this?  Which set of information do you believe?  Any links to share?</b>