This week I'm reviewing A Choir of Ill Children, by Tom Piccirilli. 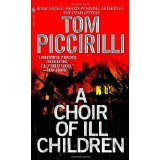 Finally, hallelujah, one I liked. It's been awhile. Piccirilli's writing style was lyrical. He used imagery to great purpose. The situation he set up was unique. He didn't have any crazy writing style that drove me nuts. The plot was intricate, involved. It took the reader back to the past in a circular fashion, dropping little hints along the way about the reality of Thomas's past.

In A Choir of Ill Children, Thomas is a rich man (at least for the area), living with his three brothers, who are connected at the head, but have three fully functioning bodies. They often speak in chorus, with bits and pieces coming out in the fashion of the brother speaking. Each connected brother has his own personality, and you can tell who he's talking about by the way he acts, thinks, or speaks.

They live in a southern town (this was quite southern gothic). Nearby are the bottoms, a swampy backwater area full of hillbillies (never called such) and granny witches. Because of his financial position, Thomas is looked up to, yet often reviled, by the locals, and they come to him with problems.

Throughout this tale is a weaving of supernatural entities, dreams, and swamp magic. Thomas dreams his mother's dreams and listens (well, he hears, but doesn't necessarily listen) to the voices of the dead, who try to warn him of bad things to come. His brothers sometimes act as a living oracle. In Kingdom Come, not everyone stays dead.

I was bemused by the fact that everyone seemed to want to sleep with Thomas. Whether it was the money and power, I don't know. We never find out if Thomas is good looking, because he's the teller of this tale, and he isn't bragging, merely relating his day to day. It also became apparent that sex was power, and that there are forces trying to take advantage of this, both for good and bad.

Each character had a personality, and no one was without their flaws, including the local preachers, one of them his good friend who lapses into speaking tongues and having fits when around Thomas. I didn't find any character to be a caricature, despite them sometimes bordering on it. There was always a twist to the character that kept them from being outlandish. Thomas looked beyond the surface at people's intentions, their fears, and what drove them, often revealing things the reader wouldn't see on their own, and opening the reader's eyes to the fact that not everyone is what you expect them to be (in fact, few are). Those who at first came across as good, might do awful things in the end, and those you thought were crazy or bad, might surprise you.

In terms of flaws, a handful of times Thomas would say what another character was thinking or feeling in that moment, abruptly taking us out of the current POV. At times, I wasn't entirely sure what was going on, but I felt this was usually lack of understanding on the POV character's part. Sometimes I didn't know what was real or dream. Yet I didn't mind it, because it lent itself to the story. However, in the very beginning, things were unclear, and I was wondering if I would dislike the book. But then it started becoming clear, as we moved forward and backward in time and got those snippets and clues I mentioned above. I believe this circular start was intentional.

I also felt like we could have felt more of what Thomas was feeling. It was never enough to take me out of the story, but in hindsight, there could have been more of his physical and emotional.

Now...was it scary? No, but it was creepy, surreal, and atmospheric. And it was a good read. I was certainly plunged into a different world.

This book was a little Lolita, a little Something Wicked This Way Comes, a little Hamlet, a little The Bottoms, and probably a little of five billion other inspired choices I could list if I wanted to sit here and do so. His writing wove a song I was happy to listen to, yet within the story was a lot of ugly that still matched the right notes. There was drug addiction, racism, murder, and jealousy, yet there was also love, friendship, and a desire for knowledge. I'll definitely check out more of his books.

The next book I review will be Dead in the Water, by Nancy Holder.

Have you read Piccirilli? Did you like it? Why or why not? Have you read southern gothic? What did you think? Do you enjoy surreal imagery, or does it annoy you?

I never read any Piccinilli, but then again I've never heard of him. I do enjoy Southern Gothic which I guess would be related to some of the writing of Cormac McCarthy and Flannery O'Connor and even Faulkner. I am a big fan of surrealism and the related imagery. That's one factor that draws me so much to the films of Fellini and David Lynch.

Arlee Bird
Tossing It Out

I've never heard of Piccinilli but this review intrigues me. Love that it's more creepy than scary.
Happy Halloween, Shannon!

I haven't really experienced Fellini, but I agree on Lynch. Love his films.

Hmmmm, will have to check that out.

Wow, that is sure a lot mixed in. Creepy can sure work when done right.

Yes, the atmospheric elements were well done. I don't read a lot of stories that are like this, and I enjoyed it.