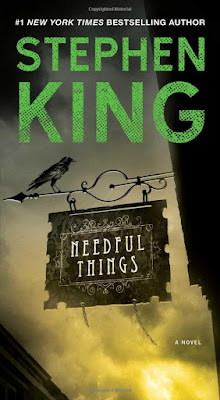 I thought I'd read this already, and then I found it on my unread books shelf (yes, I have one of those...doesn't everyone?) and realized I never had. I decided to read it, not realizing it was on this list, so yay!

This novel is about a small town (Castle Rock, which has featured in other stories, like Cujo, The Dead Zone, and The Body (Stand By Me)), and a man who shows up, opening up a mysterious shop called Needful Things. He gives everyone their most secret desires, but he exacts a price, ultimately causing the town to degrade into disturbing violence. It's amazing what people will do out of greed for their desires.

The main characters are the sheriff and his girlfriend, a local seamstress. She has horrific arthritis and is in constant pain. They're also the only ones to be able to see through Leland Gaunt's--owner of Needful Things--friendly veneer.

The first we see violence in the book, a plan come to fruition for Gaunt, it's two women tearing each other apart, literally, in the middle of a suburban neighborhood. This is after several awful things have occurred to each woman, attributed to the other woman. Muddied sheets, rocks through windows, and a dead dog.

If you can't stand violence against animals and children, this is not the book for you. Stephen King pulls no punches (does he ever?). No one is safe in this book, not puppies, not cats, not birds, not children. Fair warning.

As always, King gets to the base of each character. He intricately weaves the lives of the townspeople together, hinting at, and eventually telling about, past sins. For a small town, they sure have big secrets.

Once the violence really gets going, it's an insane maelstrom of greed, rage, envy, you name it. In fact, I'd say all of the cardinal sins are covered. And for the most part, the breakdown in civilization in the town of Castle Rock is built up just right, so the violence makes some odd sort of sense. You can see why it happened, anyway.

The people being blamed (and attacked) for committing various evil deeds are not the people actually doing those. The plot is carefully set up, with a bunch of disconnected actions ultimately coming together and making sense as you read on.

As a bonus, there are references to other King novels set in the town, with a character returning from The Body (I won't tell you who, but you'll know when he shows up). If you've seen the film, you'll know why I kept looking for the line, "I killed my wife. Is that wrong?" Yeah, it's not in the book.

Overall, I enjoyed this book, even though the animal and child deaths bothered me. It's a slow (not boring) buildup to an explosive ending.

Have you read Needful Things? Where do you rank it among King novels? What did you think of the buildup? What would your weakness be in terms of desires Gaunt could take advantage of?

I read this book a long time ago and loved it and the movie was pretty good, too. But I'm also a King fan.

Yep. About what I remembered.

I'm not really a horror fan but I do read it from time to time. Coraline was a fantastic story and the second Gaiman book I read. The first was Neverwhere, which blew me away.

Sometime, it would be really fun to read the books on your ranking list. From bottom up. :)

I still haven't read any King.

Great list! Love World War Z (the book, not the film). But Camus as horror? I guess I never thought of it like that:)

I've been on a King kick lately and reading some of his books I hadn't already read in the past and this one is on my list. Gotta admit I'm not sure I'll go with it now though because of the violence against animals and kids. Love King but those kinds of scenes are tough for me to get through.

Stephen King is amazing in so many ways. We watche Cujo recently, deciding reading the book was needed.

How long ago did you read it?

I'm not sure if I've ever read Neverwhere. I know I read American Gods and I recently read another story of his, but I can't remember what it was. Might have been Neverwhere.

Ha! It would be interesting to hear what you ended up agreeing and disagreeing with.

Since you liked it, I'd say not to read my review of it. ;) A lot of the books on this list are questionably categorized as horror.

I thought of you when I put that disclaimer out. He definitely doesn't shy away from harming animals or kids, and it's always hard to read.

I saw the movie before I read the book, too. There are some supernatural elements they didn't touch in the movie, and we feel way worse for Cujo in the book (IMO).

Some of these aren't horror, despite being classified as such on the list. Margaret Atwood, for instance!