This week I'm reviewing My Soul to Keep, by Tananarive Due. 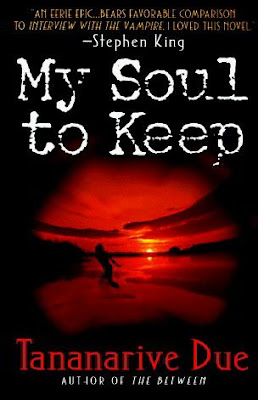 I really wanted to like this book. There were historical elements that were fascinating, and I enjoyed how those were wrapped in with the story. I was intrigued by the storyline. However, the story was too much about emotions. Which sounds weird, probably, but what I mean is that we were in the character's heads way too much, and there was a lot about their internal struggles and, yes, their emotions at any given moment. There's character driven and then there's character infested. The plot felt secondary to me.

My Soul to Keep is about an African immortal and the human woman he's married. She has no idea he's immortal or that he has lived many lifetimes. When he feels his secret is threatened, he shows a sudden lack of conscience and starts killing, devastating his wife in the process.

The husband, David, is so sensitive and emotional that I pulled back from him right away. (And, yes, I would have pulled back from a female character who was the same way.) He was needy and possessive of his wife, and my abuse-meter was twitching. While he didn't abuse her (not in the classic sense, anyway), I was uncomfortable with his level of neediness and his discouragement of her pursuing a coveted career in publishing. He's not supportive of her career in journalism or her dreams. In addition, he keeps making decisions for her. Another thing that triggered the abuse-meter. He doesn't feel she can make the right decisions, so he takes that power away from her. He thinks he loves her, but I didn't see love in his actions. I saw desperation and selfishness. There was nothing about him that made him appeal to me. The first chapter is all about his emotional agony over their dog being seriously ill, so his level of sensitivity is established right off. Everything rubbed him raw, both emotionally and physically. Which, in turn, rubbed me raw.

I couldn't feel empathy for David, and I could only sometimes feel empathy for Jessica. I wanted her to be strong and independent. She had all the makings. But allowing her husband to be controlling and discourage her from what she wanted bothered me. The fact that she saw no problem with his behavior also bothered me. While she does take their daughter and run when she realizes something isn't right, it took her a long time to get to that point. However, her character arc is significant, and she does learn strength in the end.

As often seems to be true these days, I preferred the secondary characters to the primary characters. Jessica's sister was the type of woman I wanted to see at the helm of the story. Jessica's friend and co-worker is a great guy with a sense of humor and the desire to encourage and aid her in her dreams.

The biggest issue is that I was reading this because it's on the best horror lists. There were moments where I was horrified by the actions of David, because he kept targeting innocents, and because he did so soulessly. Due hit the softy in me, but it was the type of horror I feel when watching the evening news, not the kind I seek out for escapism. David wasn't scary; he was a selfish, needy ass. He was like Dr. Frankenstein, taking others' lives into his hands to experiment with them against their will, and without a Jiminy Cricket on his shoulder to tell him this wasn't okay. Everything was about what he wanted, how things would impact him. Blech.

There are elements of the supernatural (outside of the immortality), but these are peaceful and comforting. They are not part of the horror. Religion and history are entwined with the storyline in wonderful ways. Seeing the history of the world from the eyes of a man who began time in Africa is a departure from the norm. History was a different place for someone of African descent, and rarely do we get to see that kind of world in this type of story. He traveled the deserts of the Middle East, he was a slave, and he was a jazz musician in a questionable time. To put this together with a tale of an immortal man was clever and intriguing, but not enough to carry the story through. It held so much promise that I think I fell too hard. Perhaps my review is doubly harsh because of that.

Her writing and description were strong, so it isn't that she can't write. It just wasn't the book for me. The pacing was far too slow for me. The plot was underdeveloped. The main characters were well developed, but not as likable as I needed them to be. And I was deflated from the eagerness I approached this book with. Those who enjoy character driven stories might see this book in an entirely different way than I do (it has excellent ratings), but I need more plot to keep me interested, and characters that make me want to invest myself in the story line. And I definitely need to feel like we're going to get somewhere with the story eventually.

Yeah, I couldn't get past Mr. Passive Abusey either. He was *never* worth being with, and, unlike your usual gothic romance type thing, I never felt like I was sold on the main character being swept away, either.

Sounds like a book I don't need to read.

Any book that involves abuse of any kind is when I stop reading.

Exactly! The whole thing frustrated me.

Agreed. I question whether it was intentional or not on the author's part.

Abuse usually doesn't make for a good read. Neediness can get annoying as well.

Have not read this book you've reviewed. I actually don't read that many horror books. I read Handmaid's Tale a year or two ago, but that's the only one I've read from your list. Have you read Atwood's The Year of the Flood? I read it this past summer and I thought it had far more elements of horror than Handmaid's Tale. It really gave me the creeps and kept me enthralled.

Arlee Bird
A to Z Challenge Co-host
Wrote By Rote

I haven't read it. I doesn't sound like one that interests me. I like my horror - scary and edge of the seat not needy and whiny! :)

I can't deal with books that have slow pacing now. I'll even abandon a book a chapter or two in if I sense it just isn't going anywhere anytime soon!

I haven't read that one, but I'm interested. I do want to read more by her, but wasn't sure where to start from here. I'll have to look that one up.

Fully agreed. Neither are high on my list of things I want to spend my time reading about.

Exactly! Scare me, don't irk me.

I have trouble with slow pacing, as well, unless there's something to keep me hanging on.