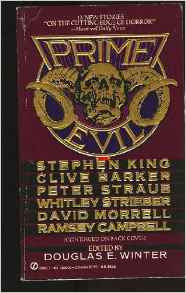 Since there are only 13 stories in this anthology, I'm going to address each one. Before I start, let me say that this is a solid collection of stories. However, not as good as a collection by the masters of horror should have been, necessarily. I was also disappointed that there were no female authors considered masters of horror in this collection.

Random fact I found interesting: The majority of these writers were born within years of each other. The earliest birth year was 1932, but it was an outlier. Then 1952 and 1953 were outliers. Everyone else was born in the 40s, with three born in 1947 and three in 1943. You think these horror authors were products of their time? Or was this just a coincidence?

The Night Flier, by Stephen King. The book opens with the King of Horror. This story was a revamped vamp story. It was a little bit serial killer, a little bit vampire, a little bit mystery. Interestingly, the POV character of the story had a dark soul, himself, which added to plot. He's a reporter tracking a serial killer he's certain must be a vampire. But what is he really? A good, clean read. Compelling characters, as always, in the case of King. Good details. There's a bit with a urinal that I got a kick out of. Not my favorite story by him, but good all the same.

Having a Woman at Lunch, by Paul Hazel. This one was a bit odd for me. There was a lot implied, rather than shown in this. I would have liked to see more. A group of men gather at a restaurant regularly, but their tastes change, and they do something extreme. The "twist" was obvious from the beginning, so then not having follow through in terms of details was deeply disappointing. If I'd known there would be so little to it, I would have skipped reading it. The writing style was interesting, though, so this definitely didn't turn me off the author. Just not the story for me.

The Blood Kiss, by Dennis Etchison. Another weird one. This had two story lines going side by side. One is the screenwriter, a woman who is getting screwed over by the boss. Running concurrently is the screenplay she's written. Interesting, but hard to stay engaged with when it went to the screenplay. And none of it was scary, so it wasn't really horror. There was a psycho involved near the end, and the screenplay was horror. The first two...horror. This one? Not so much.

Coming to Grief, by Clive Barker. This was one of my favorites, and I'm not sure if the reason is because Barker caught me unawares. I'm not big on body horror, so his usual fare tends to bore me with the repetitiveness. Yeah, yeah, more skin got torn off. Yawn. However, this was understated, haunting, and beautifully written. It follows a woman dealing with grief after her mother has died. As she goes through the motions, a creature gets closer and closer. The character development was in-depth. We never really see the creature, because it takes on the guise of someone the victim has lost. The buildup was leisurely, yet not dull. Thank you for showing me you could write something different, Mr. Barker!

Food, by Thomas Tessier. I couldn't figure out if I liked this one. I don't think I especially did, yet it stuck with me. A chronic overeater, who can no longer leave the house, eats and eats until she begins to change. It was interesting and unexpected. Not sure what else to say on this one.

The Great God Pan, by M. John Harrison. This was another story where the majority happened offstage. Three friends have apparently committed a terrible act. We don't know what it is. We never find out. They are being tormented for it. Punished. But are they really, or is it all in their heads? As with a previous story, I would have preferred to know more, to see more. If you're going to tell me they did something horrific, but never tell me what it was, I'm going to be disappointed. It also didn't have full closure at the end.

Orange is for Anguish, Blue for Insanity, by David Morrell. This one was a bit long, but a gorgeous, multi-layered story. It had a great "Ohhhhhhhh!" moment. Mostly psychological until the end. An art history student and art student are good friends, both rooming in the same place. The art historian begins studying work by someone named Van Dorn. He disappears, but gets in contact with the artist saying he has figured something out, and it's huge. His death in the same manner as Van Dorn's causes the artist to try to figure out what happened. Overwhelmingly, this is people's favorite in reviews. I found the concept of it fascinating and creative. Definitely a good one. My favorite? Probably not.

The Juniper Tree, by Peter Straub. I already reviewed this one in a different anthology, and it dealt with a little boy being molested in a movie theater. Repeatedly. No way in hell was I going to read this one again, though I did start it before I realized it was one I'd read. This time I noticed there was a theme of stickiness. All I can remember is that it was deeply disturbing to me. The character is about my son's age. Nope.

Spinning Tales With the Dead, by Charles L. Grant. This one starts out simply. A bunch of people are fishing. One pair is a father and son. It becomes apparent that everyone is dead except for the POV character. To me, this was about his guilt. I don't want to give more than that away, and I may be wrong. Not particularly scary, but it did make me think. A good story, all in all.

Alice's Last Adventure, by Thomas Ligotti. This one struck me as being about a woman's fear of aging. She saw death and a loss of her former looks when she gazed at herself. There were shadows around her, and people treated her as if she were elderly (or she took their actions to imply this). She was an unpleasant character, which at first made me wonder if Ligotti disliked women and thought this was their thought process. I'm not certain this isn't the case, but I think perhaps it's just this particular character. I was pretty neutral on this story, other than my dislike of the main character.

Next Time You'll Know Me, by Ramsey Campbell. This one was psychological. The POV character is a writer, yet he never writes. He just insists he's a writer (I imagine we've all known those folks.) He reads stories, and thinks people are stealing them from him, because he's certain, once he's finished the book, that he thought of that first. He aggressively goes after an author, insisting he stole the idea straight from his brain. The author, to make a point to his family, and because he thinks this kid has balls, pays him a stipend for the idea. So he continues to go after authors whose stories he feels were his own, because they owe him. His behavior escalates. I'm not sure this one would get to people who aren't writers quite the same way as it did me. What would you do if someone came after you and said you'd psychically stolen their book? What if they showed up at your house? Creepy.

The Pool, by Whitley Strieber. A horror story for dads. A father finds his young son in the pool, attempting to drown himself. He says he hears voices, sees something amazing, and that his dad has to let him go. This continues, with the boy becoming increasingly agitated. This one will hit you as a parent. I can't say I understand the paranormal source of it, but the child's intensity is striking. This story was incredibly short, at least compared to the others. Not a favorite, but haunting.

By Reason of Darkness, by Jack Cady. There is something chilling and deeply affecting about horror stories told from the POV of Vietnam veterans. At least for me. This story follows three veterans who met in Vietnam. Our POV character is the better adjusted of the three. The other two barely hold onto sanity, and their experiences in Vietnam were extreme. One of them calls the other two out to his house after years of no contact. They go. But what awaits them is not what the POV character expected. Both paranormal and psychological in its horror, this was a stunning story to end on. The characters were fascinating. It was intense and fast paced through much of it. Excellent story.

All of these are well written, whether I liked the story or not. The opening by Douglas E. Winter is deep, peeling away the layers of horror in the 80s (when this anthology was put together), but I found it discouraging as a horror author. The beginning of it says most horror is generic and cliche. I had to remind myself that he was speaking to readers, not writers, and that he was talking about horror at that time, which had a specific feel to it. He goes into why horror is fun, why we need it. Then he discusses how horror had changed in the 80s, and analyzed the source of fears during that time, detailing what impacted the changes we saw. It was definitely food for thought. I wonder what he'd say about the 90s? The 00s?