My WEP entry is below!

I have a story in Particular Passages 2, and it is now available for pre-order. There's no theme, just good short stories! 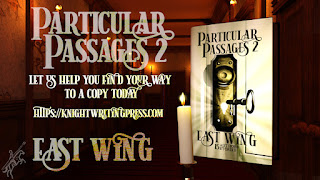 This Books2Read link will take you to anywhere it's up for pre-order. Note that Amazon does not yet have it up, and likely won't do pre-order.

Plus, Unsettling Reads put out a TOC for Summer Bludgeon, in which I have a "Grease" themed mystery short story. 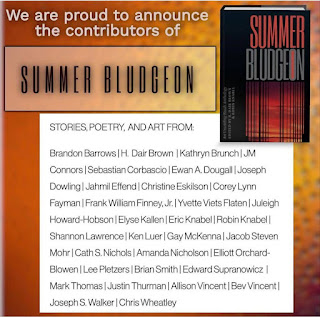 My WEP entry's different than you probably expect from me at this point. Check out the other entries at the WEP (Write...Edit...Publish) blog. 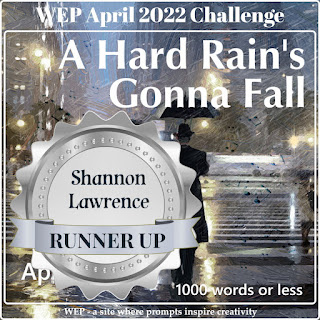 Tagline: Courage is what we make it.

Lacy stood, looking out the window at the ominous clouds in the distance. Her breath fogged the glass, belly touching the window sill, where the sharp edge pressed a crease. Cold penetrated the thin veil between inside and outside, causing goosebumps to burst across her skin like an encroaching army.

She crossed the room and sat down at the table once more, the blank page staring back at her. Yet again, she picked up the pen, pressed the tip to the yellow of the legal pad on top of the first line. The words would not come, but the tears did, a hot flood down her cheeks, soaking the paper.

Angrily, she threw the pen across the room, where it landed with a clatter. That single dot stared back at her like a judging eye.

Outside, the first light drops hit the window like tiny needles.

Her stomach moved, a ripple that rubbed the table's edge. The baby was awake.

She placed her hand against the creature moving inside her and rubbed, soothing through layers of tissue. Sometimes she felt like the baby cried, even though there was no way for her to know for sure, out here, so far removed from the life growing within her. She wished she knew what the baby was thinking, what it was actually doing. She felt oddly isolated from it. As if her own body was a shield between them.

Hunger filled her, and she thought perhaps it was a message directly from the baby. Feed me, mama.

There were so many reasons this letter shouldn't be written, and only one saying it should. But that one, oh, it was a big one.

She wasn't showing yet, not enough that she couldn't still hide it. If anyone had noticed her clothes getting bigger, looser, less form-fitting, they hadn't said anything about it. There wasn't much more time, though. Soon, she wouldn't look a bit chubby around the middle, but like a full-fledged mom-to-be, rounded belly a dead giveaway that she was soon to be a pariah.

From schoolbooks to baby shoes, innocence to motherhood.

Part of her knew he needed to know, but she knew exactly how he'd react. He'd never give up everything for her and the baby. He had promise. He was going to be something.

That's how it had been for her, too. Before.

She got up, went to the pen, picked it up. The cheap casing had cracked, but the tip was intact and no ink leaked from it. She set it down next to the pad and pattered to the pantry, bare feet cold on the rough, aged wood. Inside the pantry were pastry tarts, brown sugar and cinnamon, her favorite. She pulled out one of the crinkly, metallic pouches and brought it with her back to the table.

This time she started writing, the words flowing, spreading across the damp paper. It helped that she told herself she could always rewrite it or tear it up. She needed to get the words on paper, tell the truth, reveal it all.

Besides, her parents would be home soon. If she didn't finish it now, she might never work up the courage to try again.

A vibrant white light exposed the room, blinding her momentarily. In that same moment, thunder burst into the room, vibrated within her.

The baby kicked, rolled, then settled.

Lacy put a hand to her belly once more, this time needing the soothing as much as her baby.

"A hard rain's gonna' fall, sweet one, but I'll make sure you're okay. We're both going to be okay."

Have you read the other entries? What does the image inspire for you? What about the song?

Hi Shannon - oh yes ... I'm so glad she's going to be alright and will be looking after her baby ... I was worried for them both. As Annalisa says 'great atmosphere' - excellent - cheers Hilary

Poor girl. An unplanned pregnancy is always terrifying, especially in her circumstances. A lovely little story.

The great thing about flash fiction is that it raises so many questions that, if done well, will leave the reader thinking of the story for some time after finishing it. You have done that beautifully here. The story had a satisfying conclusion leaving me to hope for her and her baby. The storm told the story just as well as your words. Excellent!

Shannon, you should add your entry to the list on WEP, so every participant could read it too.

She's in a really tough spot all right.

So well done - and the ending is perfect. With determination, they will be okay!

I love her determination, and her focus. And hope that those hard rains bring growth and healing in their wake.

Poor girl but I liked her positive attitude that everything is going to be okay, one way or another.

Great story of courage and conviction. I hope he will embrace his responsibilities and that her parents will be supportive. Well done.

Difficult choices for your heroine. I hope the guy does the right thing. Well written.
Nancy

It was intriguing to read this close POV of a mother-to-be. Very touching. I'm hoping that in the future, her choice to care for her little one will be rewarded in some way.

You did a wonderful job of portraying the complicated thoughts and worries of a young woman who is about to become a mother in less-than-ideal circumstances. I hope things work out well for them both.

A letter that needs to be written. Sent is another matter. I hope her decision is the right one.

Yeah, hard to know how to handle that. Harder for people with no choice. Good use of the prompt.

That was just sad. I do hope that things work out for them.

A nicely written work. I feel we should all do a better job of supporting family members and friends who become pregnant, whether the pregnancy is planned or unplanned. There are few more difficult feelings than being alone with a new child to support.

A lovely story built around a moment of uncertainty, fear of the unknown, a sort of apprehension. Every emotion aptly captured.
-Sonia

A story built around a moment of apprehension, uncertainty, fear and yet mild courage too. Every emotion beautifully depicted.

I loved this line, 'causing goosebumps to burst across her skin like an encroaching army.' A wonderful story and a hopeful interpretation of the prompt.

Hi Shannon - congratulations on your 'Runner-Up' award for this entry to April's WEP ... excellent read - Hilary

Congratulations on the win Shannon. Your story stayed with me even afterwards.