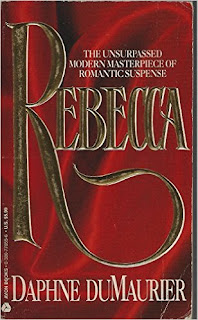 As I often end up saying in these reviews, this one isn't horror. It says right on the cover what it is: romantic suspense.

Still, it was a good book, and an excellent study in creating atmosphere. I actually used excerpts from the beginning of the book in one of my workshops to illustrate how word choice can create atmosphere.

This book is about a young woman who is courted by a wealthy older man. She ends up marrying him, and is whisked off to Manderlay, a coastal mansion she's seen on a postcard, because it's widely known. Her new husband is obviously keeping a secret, but she figures maybe this is just the way he is. And she's far too busy trying to fit into high society, when it's very much not her typical world, to delve too deeply into the mysteries of Manderlay.

This wasn't a fast read for me, but I wasn't horribly bored by it either. It should be noted that this came out in the 30s, so the pace and culture are different. DuMaurier is not only excellent at atmosphere, but she's solid on setting, as well. At the same time, her dialogue left a lot to be desired. I suppose the characters that were actually talkative were meant to be some sort of joke. Like they were the losers instead of the folks who answered every question with two words. I was dying for a real conversation at one point. It seemed like everyone was keeping everything close to the chest.

Despite the lack of strong dialogue, the characters were well developed. I was rather fond of Maxim DeWinter's (the heroine's new husband) sister, and of his assistant. Everyone else was stiff, but they were meant to be. Considering Rebecca is already dead and gone at the beginning of this book, she is also strongly developed and, in fact, has a character arc all her own. At first the heroine (she is never named, a fact that would drive a friend of my crazy--I'm looking at you, J.T.) only hears how amazing Rebecca was, and she is constantly compared to her. But then the dirty secrets come out, and we see a whole different view of the dead woman. Incredibly well done.

While the ending wasn't a surprise by the time I got there, it was still a good book. The pacing began slowly, but built toward the end. The stakes only appeared at the end, as well. But there was such a sense of something coming my way, that I was able to stick it out to see what was going to happen.

If you like romantic suspense, and enjoy the slower pace of a classic piece of literature, I'd recommend this. If you're looking for horror or something you can chew through at a fast pace, it would be best to go with something else.

The next book I'll be reading is Prime Evil, an anthology edited by Douglas E. Winter.

Have you read Rebecca? How about her short story The Birds, on which the film was based? Who do you think is a master of building atmosphere in their writing?

Daphne DuMaurier was a gifted writer, to be sure. Read "Rebecca" so long ago, but I won't forget the movie.

Hi Shannon - I haven't read Rebecca - but only just read Jamaica Inn ... which I found scary and very evocative of Dartmoor.

I know the areas well ... having driven through regularly and visited a near-relative of my parents - who know the estate that was described as Manderley in the book ... it's a stunning part of the world ...

I used to not like reading or watching horror or scary books or programmes ... I'm sort of getting over it -and must now give Rebecca a read ... the library beckons ...

I've only seen the movie. It's interesting how tastes change over time.

She was definitely a gifted writer. I've only read this the story The Birds came from (can't remember if it was called The Birds or something else.)

How amazing! I didn't even think of where Manderley was based on.

I've never seen the movie. Was it good?