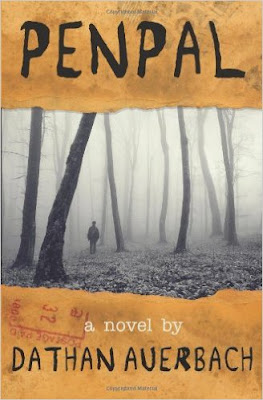 This book was okay. It had the elements of an amazingly creepy story, yet it didn't deliver. There was an insane amount of unnecessary exposition that slowed the story too much for me. Details that never ended up having a point.

Penpal is about a boy who went through some scary things, but it's told from the perspective of adult him, looking back. The way the story unravels, mundane things are set up and built upon until later in the story, where we find out deeper meanings to them. Knowing that he's looking back on this as an adult severely lowered the tension for me. He obviously survived if he's the one telling the story. So I was never worried about him, and if I couldn't worry about him, knowing he grew up, then what was there to be scared of?

Near the end, others are put in danger. For me, this was the only time I felt any tension. At that point, I read the book much faster than I had been previously.

Because of the way this was written, I hesitate to give too much away. I can say there were creepy details, ones that I could think, "Ah, that's a great detail," but they fell flat because of the storytelling style.

In the end, I so badly wanted those freaky details to pan out, but they didn't. Yes, the truth of what happened when he was a kid was frightening when I thought about it, but I had to think about it... I had to work to be freaked out, and even then it was, "Oh, yeah, wow, that could have been bad." I even tried to identify with what the mother must have been feeling, considering she knew how much danger he'd been in, but she's a teeny minor character, and it wasn't possible.

Interesting fact: This began as a series of posts on nosleep on Reddit.

The next book I'll be reading on the list is Daphne du Maurier's Rebecca.

Have you read this? Have you ever read something on nosleep on Reddit? What about contributing to it?

I've not heard of this one, but I think I'll skip it. Too many other good ones on your list that I've yet to read! :)

Great review, but I'm skipping too. Not that I've picked up many of your scary reads. LOL I have too many nightmares already! Never knew you could contribute a write to Reddit, but I don't know any more about Reddit than it's name. I'm so out of it! :)

I'd put Handmaid's Tale at the top alongside Poisonwood Bible. They're by far the tensest stories out there.

Thanks for the review!! I may pick it up, just to see.

I don't blame you!

I'm not really familiar with Reddit either. There's that and something else where people contribute stories as if they're real. I did read one, and it was great. I spent a day reading through people's responses to this ongoing story, thinking it was real. Fascinating. I wish I could find it again to share.

I haven't read Poisonwood Bible yet, but need to.

I'd love to hear what you think if you do.