The publishing world is an odd one. Sometimes it moves at the speed of sloth. Sometimes everything hits at once.

I had five publications with unknown or tentative release dates, and I was waiting to hear when they'd be releasing. Well, Saturday I was notified of the release of Once Upon a Scream, an anthology I have a short story in. 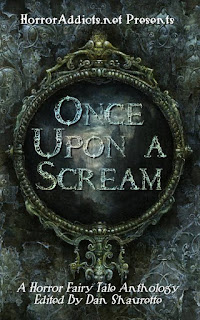 My short story is entitled The Black Undeath, and is a new take on the Rumpelstiltskin fairy tale. With zombies.

It can be purchased at Amazon or CreateSpace in paperback for $13.00, but the e-book won't release until May 28.

Horroraddicts.net also did a podcast that involved an interview with Dan Shaurette, the editor, and mentioned something about each of our stories. It's Episode 124. My kids loved hearing my name on a podcast.

If you'll be attending BayCon, those authors from the anthology that could make it will be doing a panel and release party. (I can't make it--sad face.)

The very next day, I received an email that Ember: A Journal of Luminous Things, Volume 2, Issue 2 had released. My creative memoir flash fiction piece, Grandma's Leather Sofa, is in this issue. 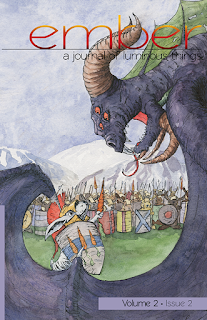 This one is kid friendly (one of the very few things I've done that is.) In fact, there are stories in Ember written by kids. And it's fully illustrated! It's on sale for $14.95 at E&GJ Press, but you can use the coupon code SLAWRENCE-FRIENDS to get 35% off!

I actually waited on posting the Ember release, because I didn't want to be obnoxious with the releases on Facebook. But I'll post it today. The kicker is, it looks like one of the magazines I'll have a story in will come out in a week, so boom, boom, boom, three in a row.

Knowing the publishing industry, there will be a gap before the other two release. Funny how that works. Things have been crazy with these two releases and the details surrounding them, and then it will be back to glacier speed, as I wait for acceptances/rejections and release dates.

I enjoy the ride, even if it is sometimes random and stressful.

How was your weekend? Any publishing news to share? Other fun stuff? Have you ever had multiple publications come out at once?