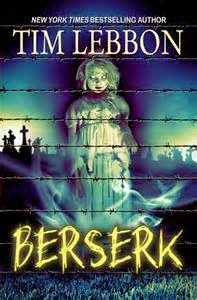 Berserk is kind of a vampire novel, but they're berserkers, not vampires. They change form before they feed, kind of like a werewolf, but not really. Jaws elongate, hands become claws. They don't just tap a vein, either. Instead, they gorge themselves, sort of like zombies.

What I'm saying here is that this is a whole new monster that appears to be a combination of other monsters. Great strength, vicious, deadly. I admit that I mostly saw them as vampires, but I'm not sure that's accurate.

This story follows two POV characters. Tom is a man who lost his son to a supposed training exercise while serving in the British military. He and his wife have a strong marriage, but neither has been able to get past their son's death, though it's been years. He just happens to overhear a couple veterans speaking in a bar about Porton Down, the place Tom's son was supposed to have died.

After convincing one of those men to tell him more (with the other man warning him not to), Tom discovers that there was no accident. Instead, a monster was unleashed, and his son was a casualty. The man gives him a map so he can try to find the mass grave his son and several other soldiers are buried in.

The other man, in the meantime, turns out to be our other POV character, Cole. See, he knows all about what went down, and he has made it his life's mission to keep it quiet and insure the evil doesn't spread.

Cole is our villain. Tom is our protagonist. I found myself frustrated with each of them sometimes, for poor decision making skills. Cole is convinced throughout that his is a righteous mission. Not in a religious sense, but in the sense that he's saving the citizenry, that he knows better than the rest of the military, and that it's up to him to insure there's no repeat of Porton Down. And as he begins to rack up a body count, he justifies it. It's what he must do.

Tom frustrated me because he lied to his wife and endangered her in doing so. He heads out to Porton Down, leaving her sick and alone in their rental. He doesn't tell her that he has news about their son, or what he's off to do. The map leads him to the base, where he's able to scoot under the fence and find the mass grave. As he digs, he comes across body after body, checking the dog tags for his son's name. At the bottom of the grave, he comes across disfigured skeletons and one small corpse that is mummified for some reason, not like the other bodies.

The tiny corpse shifts, and is able to speak to him mentally. She, Natasha, is alive. Here's where the chase begins. Cole has found out that the other man told Tom about the mass grave. Now, he must kill Tom to keep it from getting out. Even worse, when he finds that Natasha's body is missing, he knows he has to get her back and finish what he started all those years ago, when he ordered her buried alive with her dead family in order to punish her.

The chase is not quite cat and mouse, because there's a greater predator at play, and she's on the mouse's side. She may know where Tom's son is, and he may be alive. He certainly wasn't in the mass grave. Now Tom has a reason to help her, to drag her corpse to a new destination and meet up with the free berserkers that might know of his whereabouts.

Now we have a reason for him not to just ditch this little mummy girl.

The pacing was good, the characters okay. Tom was a little fickle for me, Cole a little crazy. But we knew them. We knew what they were thinking and why, as we get a lot of insight into their thoughts. Situations stacked up in ways that were engineered to draw the story out and force one decision or the other, which felt a bit forced to me.

I was conflicted on how I wanted the story to end, but when it ended, I was sure that wasn't how I wanted it to end. It's not an awful ending, but it wasn't satisfying. It did wrap up the story somewhat, but there's a hope held out throughout the story that gets dashed. I don't know how else to discuss the ending without giving anything away, so I have to leave it at that. I just felt deflated at the end. It didn't seem to be the right place to end it, nor the right circumstance. Basically, it elicited a mental shrug from me.

The story did keep me engaged, and I found these creatures interesting, especially their origins. It's fun when there's a new monster, not just a rebuilding of one that's been done time and again. These monsters are savages, but ones you can feel for, at least some of the time. If you're interested in stories about government conspiracies and genetic modification (creating the perfect weapon), you get a little taste of that in Berserk. But you don't actually get to hear the details. How it was done, what they're based on, etc.

There are a lot of secrets in this book. Secrets, lies, misinformation. It's a theme throughout. Innocents die because of these secrets and lies, and it's not just the bad guys who lie. The good guys lie, thinking they're saving someone trouble or giving them hope. But their lies are just as damaging in the end.

Berserk wasn't scary. The girl had creepy promise, but was too sympathetic a character to continue being creepy. It was an original idea with some suspense to it, though. When I look through reviews on Amazon, it appears this isn't Lebbon's best, not even close, so I wonder why this one was chosen for the list. Even so, I enjoyed reading it overall.

Current ranking of the books I've reviewed for this:

The next one I'm going to read is Hotel Transylvania: A Timeless Novel of Love and Peril, by Chelsea Quinn Yarbro.

Ever read Tim Lebbon? Berserk? If so, what creature came to mind when reading about the berserkers? What did you think of the end?

Hm. Now I'm conflicted. To read or not to read?

I've not heard of this one before, but the creatures sound interesting. Though I rarely like to read the POV of the villain. Thanks for sharing your review. Have a good weekend!

I have never heard of this one, but I think it is interesting that it has a unique monster.I have only read two of the books on your list. I read 1 and 2. :)
~Jess

I like the honesty of the review. I hate when a book ends in a way that I don't agree with or just overall has a weak ending, but I guess that's just the writer in me. I've never even heard of Tim Lebbon, but with all of the great horror out there and this not even being his best I'm thinking I probably won't ever check this one out.

I like it when books are different, but still keep me reading. I like a touch of horror, so I often resort to the master Mr. King.

You might not dislike the ending as much as me. I'm curious about his other books.

Is there a villain's POV you've enjoyed reading it from? When it's well done I like it. In this case, I feel it was unnecessary.

It seemed different to me than what I've read before. I liked the originality, but there were other issues.

I'd probably look at other books of his first. I suspect there are better.

Those are good ones (obviously I think so--they're one and two on my list)! How did you feel about them?

I'd say reading a different piece by him would be best. When I looked through the reviews posted on Amazon after I'd written mine, there were suggestions for books of his that were better. I'd start there.

He will forever be the master. He does so many things right!