A is for Agenda & Clay Allison

Yay! It's time for the A-to-Z Challenge to begin! You can still sign up through tomorrow night, if you haven't already. See the A-to-Z tab at the top of my page. While you're there, check out the Flash Fiction Contest. The theme is "Are you devious at heart?" First prize is $100.

I figured for Day 1 I would outline my Agenda. In addition to my regular posting schedule (Monday-Writing Topics, Tuesday-Teaser Tuesday, Wednesday-[Mostly] Wordless Wednesday, Thursday-Helpful/Interesting Links, Friday-Guest Posts/Feature Friday), I will be following the theme of the Wild West! Initially, I was going to do a Colorado-themed topic each day, but since my next WIP has a bit of a Western flair to it, the Wild West was on my mind.

My first Wild West topic is: 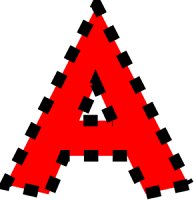 There were other things I'd thought about writing about today, but Clay Allison kept popping up. Turns out, he was a pretty interesting guy.

Robert Clay Allison was born to the ranching life on September 2, 1840 in Tennessee. From a young age he showed erratic behavior, and was described as having wild mood swings. At the age of 21 he enlisted to fight in the Civil War, just as it broke out, fighting on the side of the Confederacy. True to his his youthful behavior patterns, he was always eager to jump into the fray, becoming enraged with his superiors if they didn't fight or actively seek the enemy. 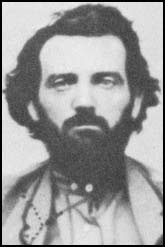 He was medically discharged, due to his behavior, described as "partly epileptic and partly maniacal," but re-enlisted in another unit shortly thereafter. This ended with him having to surrender with his unit, held as a prisoner of war for seven days in May of 1865. He was to be shot as a spy, but killed their guard and escaped.

Clay joined the local Ku Klux Klan, killed a Union soldier who came to seize the family farm, and ultimately joined up with Charles Goodnight and Oliver Loving in 1866, participating in the famous Goodnight-Loving Trail, which involved herding cattle through Texas, New Mexico and Colorado. He and his brother eventually worked for other famous cattlemen, which ended with them being given 300 head of cattle to do with as they pleased.

They settled down outside Elizabethtown, New Mexico, where Clay continued getting himself in trouble. He enjoyed the stereotypical life of a Wild West bad boy, getting drunk in town, fighting with others, shooting up the town and making newcomers dance by shooting at their feet. He led a lynch mob after Charles Kennedy, who was accused of killing and robbing those who stayed overnight at his cabin; they tied a rope around his throat, tied him to a horse and sent it running through town. He took Kennedy's head as a trophy, parading around town with it.

Bored, Clay attempted to get into a bit of cattle rustling, getting away with it the first time, but shooting himself in the foot accidentally when caught the second time. He continued to get into fights at the local saloon, making enemies at a headlong pace.

In 1873, he eloped with Dora McCullough, much to her parents' dismay. You might think this would calm him, but not so much. He continued getting into trouble until the Colfax County War came upon the area. This set the Santa Fe Ring, a bunch of politicians and financiers, against the Colfax County Ring, the landowners being forcibly evicted by the Santa Fe Ring and the sheriff, against each other. Things came to a head when multiple factions, which now included a contingent of Mexicans and Indians out for Clay's blood, set out trying to destroy each other, locked into the town of Cimarron by order of Clay Allison. He survived. 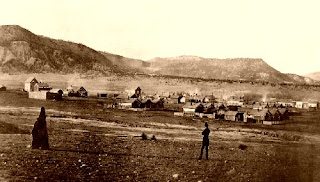 Governor Axtel put a reward out for Clay Allison, accusing him of a murder he was thought to have committed years earlier. Clay gave himself up, demanding a fair trial. He was set free, there being no body and no proof that a murder had occurred, and he promptly set out to get himself into more trouble, killing a sheriff in Las Animas, Colorado (Oh look, there's Colorado again!) when the sheriff tried to remove him from a social he'd crashed. He was let go for self defense, a defense that had gotten him out of hot water repeatedly over the years for other murders he had committed.

He sold his ranch to his brother and took off to Kansas in 1877, becoming a cattle broker. In 1878 he arrived in Dodge City, Kansas, ready to start a fight with Wyatt Earp and Bat Masterson over the perceived mistreatment of cattle men in the town. Multiple stories exist on how Clay ended up leaving town, but whichever way it went, he left without a gun battle. Further antics kept him in the public eye, but nothing major occurred for some time.

In 1885, Clay Allison and his wife had their first daughter. They moved around a bit, settling in Pecos, Texas. On July 1, 1887, Clay Allison was killed while unloading a wagon, which ran over him, breaking his neck. He died a landowner, after a life full of infamy. He was 47 years old.

1. In Cheyenne, Wyoming, Clay Allison went to the dentist at the end of a cattle drive. The dentist began pulling the wrong tooth, prompting him to jump out of the chair and find another dentist. The aching tooth successfully pulled, Allison went back to the first dentist and pulled out one of his molars. He tried to go for a second, but the man was screaming so horribly, men came running and got Allison off of him.

2. In Texas, people claim Clay Allison rode through the streets naked until the sheriff tried to get him to give himself up. Instead, he got off the horse and forced the sheriff, at gunpoint, into a saloon, where he plied him with liquor until he couldn't function anymore.

3. During the worst of the Colfax County War, Clay Allison was said to walk the streets accompanied by 45 armed men, as so many were gunning for him. 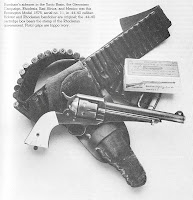 4. After Governor Axtell put a price on his head, Clay Allison managed to get himself on the governor's coach and ride with him to Trinidad, Colorado. It was during this ride that the governor convinced him to turn himself in, and promised him a fair trial.

5. A man named Chunk Colbert tried to kill Clay Allison on January 7, 1874, after befriending him and drinking with him all day. Allison was the quicker draw, and shot him as they sat facing each other across a table. Years earlier, Allison had killed Colbert's uncle, though it was never established whether this was a revenge attack or simply a known gunman (Colbert) wanting to fight an infamous shootist and cattle man (Allison). Either way, he lost.

6. In Texas, Clay Allison had an argument with a neighbor about who owned a watering hole. They dug a grave, jumped in and fought with bowie knives. No one knows whether the neighbor was killed for sure, but the deal had been that the loser would be buried in the grave.

Ever heard of Clay Allison? Do you think he deserved the moniker "Gentleman Gunfighter?" Do you have a theme for your A-to-Z Challenge, or are you winging it?

*Red A courtesy of Dawn at clker.com
**Photo of Clay Allison courtesy of Find a Grave member John "J-Cat" Griffith
***Photo of Cimarron, New Mexico courtesy of Legends of America
****Photo of six-shooter courtesy of Wikimedia Commons, Public Domain
Posted by Shannon Lawrence at 4/01/2012 07:00:00 AM

Email ThisBlogThis!Share to TwitterShare to FacebookShare to Pinterest
Labels: a is for, a to z challenge, clay allison