I'm reading through three lists of best horror with two friends, posting reviews as we go. (For more information, including a list of the books, see this post.) So far, I've reviewed Poppy Z. Brite's Drawing Blood, Robert McCammon's The Wolf's Hour, and Laird Barron's The Imago Sequence. This week, I'm reviewing Coraline, by Neil Gaiman. 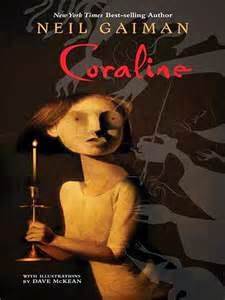 The version I read, borrowed from the library, was an anniversary edition. It had a snippet at the beginning about Gaiman's inspiration for the story, which was a fun addition, and gave me some insight into the details behind it.

I liked this. A lot. I'm surprised I hadn't read this before. Of course, I'd seen the movie, which I enjoyed, so I was wary of liking the movie better. However, they're pretty close, and both are wonderful.

Coraline's parents are busy people, wrapped up in their own worlds, so she spends her time exploring and playing on her own. Everyone she interacts with only barely listens to her, and they never really hear her. If you've ever had your name mispronounced, especially if it happens habitually, you'll know how she feels when it repeatedly happens to her. While I've always been called Sharon instead of Shannon, Coraline gets called Caroline. I automatically had that internal urge to correct them when they called her Caroline. I think I would have appreciated that part of the storyline as a kid.

The story takes a turn when Coraline begins seeing shadows and hearing someone moving around the house. A locked door magically unlocks. On the other side, she finds a flipped world that looks much like the real world, and is inhabited by twisted versions of the people in the real world. Things seem better in this version of the world at first, with people paying more attention to Coraline and calling her by the correct name. Then things begin to change. Through it all, Coraline is clever and polite. She faces some freaky things, like her Other Mother and Other Father, alternate versions of her parents possessing buttons instead of eyes, and she remains brave throughout, acknowledging that bravery doesn't mean you aren't scared. A great lesson for kids.

By the end of the story, not only has she been shown how important her family is to her, I'd like to think her parents learned the same thing.

Gaiman creates a unique girl who is easy to identify with. The alternate world is creepy and well realized, the atmosphere surreal. Yet there's something about Gaiman's writing in this that makes it feel comfortable and intimate, like he's directly telling you a scary story. The dialog is witty. There's a solid creep factor throughout, with some scary moments, things that would not only be frightening as a child, but that adults can identify with, as well.

Basically, I don't have anything bad to say about this story. I'm glad I finally read it. The version I read had illustrations that fit the mood perfectly. I enjoyed it as an adult, and part of that was because I could still identify with being a kid in a world that looks down on them, humors them, condescends to them. She was so lonely, yet not in a self-pitying kind of way.

From the adult perspective, it made me look at how I interact with my kids. Am I paying them enough attention? When they speak to me, do I really listen? Often, the answer to that is no. Much like the adults in the story, I'm so often deeply engaged with myself, my work, my troubles, that I give them the attention I have to, but don't always see the people they are, and let myself set aside my work, my finances, my b.s., and just enjoy hanging out with them.

For kids, they get to see that other kids deal with these same issues, and they maybe get some insight into the fact that it doesn't mean adults don't care, just that they're preoccupied. They see this girl using her imagination, being strong, brave, and polite, using her wits to problem solve and get out of trouble. It shows her caring for and worrying about other people, not just herself.

All in all, I found it delightful. I'm looking forward to reading this with my kids. When the book I purchased gets here. :)

My next review will be Margaret Atwood's The Handmaid's Tale.

Have you read Coraline? Seen the movie? Which did you prefer? Did you enjoy either or both? Did you read it as a child or an adult? Have you read a book that made you look at yourself, maybe your parenting or another aspect of your life, and re-evaluate?

I've never watched that movie but as a teacher, I've met kids who constantly have their name mispronounced. I made sure to give my kids easy names so they never happened to them.
Looking forward to what you say about Handmaid.

I want to say that I liked the movie more, but I can't actually remember, now. The two have blurred together in my head, but I think the movie is the stronger image.

I saw the movie. I really enjoyed it. I'm not sure I realized it was a book first though.

I loved this book. The button eyes really struck me as creepy and wrong, in all the right ways. I remember being impressed that the movie did such a good job adapting the book, which isn't always the case.

I just loved that book... Never seen the movie. Hope you had a great thanksgiving?

You know, I thought my kids' names were easy, but apparently everyone thinks Gabriel should be pronounced Gabrielle. It drives me nuts. NUTS, I say! And who would have thought Shannon was such a hard name? Gah!

The movie was so visually interesting that I don't doubt it would stick with you most. I pictured the movie while reading. They stuck very close to the book, though.

I can say for certain I had no idea.

In hindsight, I felt the same way as I read it. They were very close. Not often you see that.

I hope you did, as well, and that you have a wonderful Christmas. The movie is worth a viewing if you liked the book, I think, since it's visually appealing and close to the book. The mood is perfect.