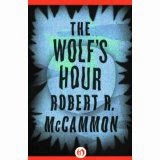 I'm reading this book now and I think you pinpointed why it doesn't ready like horror. The head hopping isn't bothering me - yet :)

James bond pretending to be horror, a fun tag line right there haha

I seldom read horror. I've read a few books lately that have serious head-hopping going on. It really takes you out of the story if you're trying to figure out whose thoughts you're reading.

Robert McCammon is one of my favorite horror writers. But, I agree with you this does not sound like horror; and the head hopping thing would annoy me to the point of putting the book down.

Yes, to me, the horror book should elicit all those definitions in me. its getting harder to find true horror novels anymore as everyone wants to make the villans all angsty instead of just plain evil.

Head hopping as a "no no" is another one of those myths like adverbs. The truth is most readers don't care. Id they did, people like George RR wouldn't be so popular.

Marcy, I'm curious to see if it does. It didn't bother anyone else I spoke to, either, so maybe it was just me?

Susan, it does, for sure. Luckily, I don't run into it much,

Dolorah, I look forward to reading his other stories then! There are several on the list, so it's not just you. And I did like this story, but not as horror. Ugh, angst.

ANdrew, true. I think it can be well done and it can be so horribly done that you're left gaping at the book unable to figure out who's talking. He did it well enough, for the most part, that I knew who was saying what, so it was fine.