I mentioned a story type I've been experimenting with this past Wednesday during the IWSG. The story is experimental in that I've long enjoyed the genre, but I've never written in it. It's a play on the goofy critter horror films, like Tremors and Lake Placid. The idea is fun. The opening scene amuses me. But I realized I'd gotten so focused on figuring out where the story was going that I wrote myself into a corner. I started limping along, struggling with where to go next. And something was missing. What?

So I started thinking about what I like about those movies. And it really boils down to the characters, doesn't it? Those movies are often enjoyable because of a combination of things, but the characters bring it home. Tremors wouldn't exist without Val and Earl. Nobody would have cared enough to stick it out. Though the rest of the characters are quirky, and add quite a bit to the story. Still, Val and Earl make it. And not just one or the other--it's the relationship between them that carries the film. 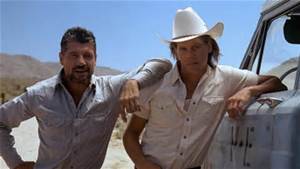 Would anyone have stuck it out in Lake Placid without the quick, snarky dialogue between the four main characters? The shocking profanity from Betty White? At least, it was shocking when the movie came out. These days I think we all know she's spunky and not afraid to have fun, but back then she was just Rose (?) to me. Pretty sure I bark-laughed quite a few times during this one.

I've set my story up with two characters that share some snappy dialogue in the beginning, but then I lost that relationship. I buried it while I was trying to get to the next place in the story. Now that I've figured this out, I think I can get somewhere, but it means going back to the second scene in the story and writing fresh from the point where all hell breaks loose.

In addition, I want to inject more unexpected humor into it. That's something else that's enjoyable in both Tremors and Lake Placid: unexpected humor. Often, inappropriate humor, where the horrific is mixed with something ridiculous. I've put a few details in that are a kick, but I need more. More! Despite the fact that I'm a major smartass in real life, I don't often write that way. Weird, right?

One problem I'm running into is that I haven't actually read any stories like this (specifically, goofy critter horror). I'm taking something I've only experienced in a visual medium, and trying to convert it to a short story. Which is not a horrible roadblock, but I suspect it's at least a sawhorse taking part in the roadblock. An orange cone of doom?

For those of you who enjoy this sort of film, what elements do you think you enjoy the most? Is it the characters? The humor? The pure absurdity? Or something else entirely? What do you seek out when you view one of these? What missing element makes you sad? Have you experimented with your writing lately? How'd it go?