Unfortunately, fire season in the Rockies is upon us again. I woke up feeling like I'd see a plume, probably just because I'd gone to bed knowing that three fires were burning (at least), two of them not too far from me. Looked outside, no plume! But then it turned out I was looking in the wrong direction... 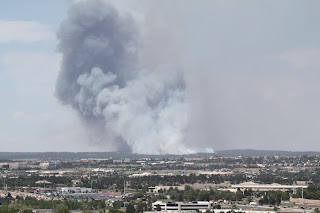 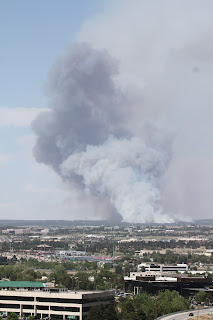 I took these photos from an overlook a couple miles from my house. My kids were worried when they saw the plume (after all, the last plume they saw brought plenty of terror and stress with it), so I took them up to show them how far away it was, how much was between us and the fire, and that it was on the other side of the Interstate, which is big all on its own.

This fire is about 15 miles from us, so we're not in any danger, but our friends are, and my little brother is a police officer, and was called away during a family dinner (two of my brothers have birthdays this week), so I'm hoping they get this fire under control before the 30mph winds and dry heat hit again today. Fire and police are working hard throughout the night in order to get some control while the fire is dampened (which happens at night). This is in an area called Black Forest, where a lot of people have small properties on forested land. The concentration of homes, trees, and brush has caused the fire to spread rapidly, especially paired with high temps and fast winds. Please keep residents and first responders in your thoughts and prayers.

Since I brought you all down on Hump Day, how about a random interesting photo? The kids and I saw a spiky yellow melon at the grocery store and decided we should try it. When I cut it open, it appeared to be alien fruit. The taste was mild, but the consistency was like biting into jell-o fruit. Chunky Alien Egg Jell-O Fruit. Ucky.

Dark Continents Publishing has put out a call for their anthology "The Sea," edited by Nerine Dorman. Looking for short fiction in the genres of horror, weird science, fantasy, and sci-fi, following a sea theme. Pays $20 per story. Deadline June 21.

The Stinging Fly is looking for short fiction, poetry, and flash fiction for their Spring 2014 issue. Deadline for short fiction and poetry is June 30. Flash Fiction entries can only be submitted one day: June 22. Token payment, plus 2 issues of the month you're featured.

Columbus Creative Cooperative is looking for short fiction and narrative non-fiction by Ohio writers, past and present, only, for an anthology entitled "Best of Ohio Short Stories." Deadline June 24. Pays in a share of the profit.

Origin Fiction is accepting submissions for their sci-fi anthology "Origin Evolutions." The theme is 2113 (the year), and whatever you foresee that as. Deadline June 24. Will pay on a pro-rata royalties basis.

Kazka Press holds a monthly 713 Flash contest, wherein you write to a theme. This months theme is Life During Wartime, with a deadline of June 20. They pay $10 per story.

Heather and Tara are hosting The Thrill of It All Blogfest on June 24. Share a big thrill, and you'll be entered into the contest. There are prizes!

Any of these interest you? Anything to share? Any success stories to share? Will you be telling us a thrilling story? Ever tried Chunky Alien Egg Jell-O Fruit?