Hi All! Today I'm handing The Warrior Muse over to Beate Boeker so she can tell us a bit about creating heroines people want to read about.

***
Creating Strong, Likable Heroines, by Beate Boeker
Funny enough, the most important thing about creating a strong heroine is to give her a weak spot: something she has to fight with and has to overcome, something that makes her life difficult. This is important for two reasons: First, a reader can identify with a heroine who has a weakness – because we all know our own weaknesses. A perfect heroine will only disgust everybody because it's not likely that she exists at all, and if she does, you don't want to have her next to you all the time. Second, this weakness is perfect in order to pitch your heroine into trouble – and that's what you need to make your story compelling.

In my mystery series Temptation in Florence, the heroine Carlina is a successful business woman. She has a high-end lingerie store called Temptation on one of the most exclusive streets in Florence, and she loves her job and is dedicated to making it a success. She's financially and emotionally independent and strong – in fact, she even chucked her desirable fiancée several years ago because he expected her to give up working independently, and she just couldn't face that.

Her weak spot is her fierce loyalty toward her wide-spread family. As the family is rather eccentric, being loyal to them is not a given, particularly when bodies turn up and more often than not, the family applauds the murder.

Carlina falls in love with the Investigating Officer who has no understanding at all for this closely knit family. Throughout the series, she is torn in two between her family and the man she loves, and that's what keeps the story alive.

Another point to remember is that details make a story vivid and help to paint a picture in the mind of the reader. Carlina has two very attractive cousins that overshadow her a bit if you don't look closer. Besides, she's a hard-working and sober kind of girl, so to add a bit of pizazz, I have her a soft spot for anything that has a leopard pattern – be it her own underwear, the throw on her sofa, or the pattern on the helmet she needs to drive her Vespa.

I very much enjoyed creating Carlina and like spending time with her, her exuberant family, and the taciturn Commissario, and I hope that my readers will connect to her in the same way when they read my novels. 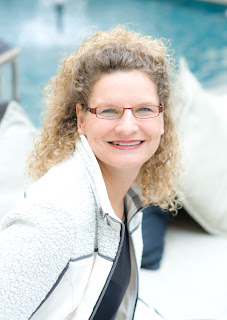 About Beate: Beate Boeker is a traditionally published author since 2008 and has 11 novels and short stories available online. Some of them were shortlisted for the Golden Quill Contest, the National Readers' Choice Award, and the "best indie books of 2012" contest.

Beate is a marketing manager by day and a writer by night. She has a degree in International Business Administration and her daily experience in marketing continuously provides her with a wide range of fodder for her novels, be it hilarious or cynical.

Widely traveled, she speaks German (her mother language), English, French and Italian fluently and lives in the North of Germany together with her husband and daughter.

While 'Boeker' means 'books' in a German dialect, her first name Beate can be translated as ‘Happy’ . . . and with a name that reads ‘Happy Books’, what else could she do but write novels with a happy end?

Although being German, she has chosen to write in English because she appreciates the professional support and training opportunities a writer can find in the US. Learn more about Beate at www.happybooks.de

About Delayed in Death:
What do you do when you find your grandfather dead half an hour before your cousin's wedding? You hide him in his bed and tell everyone he didn't feel like coming.

Delayed Death is an entertaining mystery set in Florence, Italy. When Carlina finds her grandfather dead on the day of her cousin's wedding, she decides to hide the corpse until after the ceremony. However, her grandfather was poisoned, and she becomes the attractive Inspector's prime suspect. On top of that, she has to manage her boisterous family and her luxurious lingerie store called Temptation, a juggling act that creates many hilarious situations.

Delayed Death is the first mystery in the series Temptation in Florence. The second, Charmer's Death, and the third, Banker's Death, are also available. http://amzn.to/VMeCUz