About a month ago, there was quite a ruckus down the street from me. People stopping their cars in the middle of the street, other people standing out in the middle of that same street, people trying to climb a tree. Why? There was a giant nest with three great horned owl babies in it. "Little" downy, fluffy, curious owls. I walked to an area across the street  (not IN the street, mind you) and used a telephoto lens to get some photos, hoping not to disturb them too much.

A ranger said the owls have spectacular vision. If you look at the photo, the little owl in the front was watching me the whole time I was taking photos, just as curious about me as I was of him/her. The one in the middle never stirred, so I figure it was maybe sleeping, and the one on the right flexed its wings a few times. 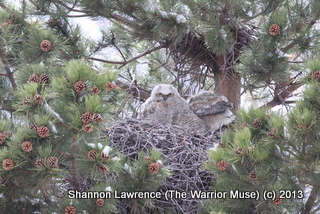 Due to people endangering themselves and the owls (some idiot climbed up and tried poking them with sticks, and there was a day I had to swerve around some putz who stepped in front of me in the middle of the road as I drove back from the store, despite the fact that it was cordoned off so people would stop doing that), they ended up having to move the babies to a shelter until they can release them into the wild. I was sad for the parents, both of whom were still tending the babies. Yes, the dad stuck around, too, not something you see a ton of in nature.

Anyway, just wanted to share the babies today, as I drove by yesterday and noticed the big nest still there. That way maybe you don't have to stand in the middle of a busy street to take photos of owls. ;)

Allegory is taking submissions through June 30 for their September issue. They are primarily looking for science fiction, fantasy, and horror. Pays $15 flat rate.

Perpetual Motion Machine Publishing has two calls out for anthologies. Bleed is a charity anthology, with proceeds going to Children's Cancer Fund. They're looking for allegorical horror, where the monster represents cancer. Deadline June 30. Long Distance Drunks: A Tribute to Charles Bukowski, pays in royalties. Deadline is December 31.

Stilts is open for submissions for Issue 4 until June 30. They are "looking for four pieces of long-form writing that explore ideas of ritual." Pays $250.

Crossed Genres is seeking submissions for its October issue, with the theme "Strangers." They're looking for science fiction and fantasy. Deadline is June 30. Pay special attention to their caveat for those who have not sold a story to a professional paying market. They make a point to feature at least one new writer in each issue. Pays 5 cents per word (professional paying market).

Crossed Genres also has an anthology for which the deadline has been extended to June 30. They are looking for sci-fi/fantasy stories about quiltbag families. $20 flat-rate payment, plus a print and e-book contributor copy.

Fey Publishing is seeking submissions for several upcoming anthologies. The themes are "Happily Never After" and "Horrors of History." Deadline is July 1 for both. Not paying at this time, but you will get a free e-book copy.

Casey Shay Press is open for submissions to the 2014 Mary Ballard Poetry Chapbook Prize through June 30. No fee to enter, and the winning poet will receive $500 and 25 copies of the chapbook their poetry will go into.

Any of these look good to you? Any experience with any of these publications or contests? Do you have great horned owls in your area? Would you climb the tree? Let me know if you submit to any of the above!