I is for Iron Pillar of Delhi, Plus [M]WW & Links

For [Mostly] Wordless Wednesday, I've got the Indigo sky of Colorado (taken at the Will Rogers Shrine on Cheyenne Mountain). 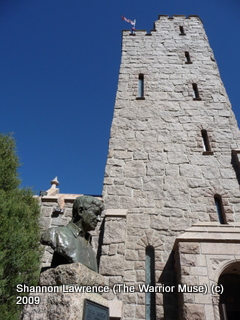 is for Iron Pillar of Delhi.


The Delhi iron pillar stands at Quwwat-ul-Islam Masjid, in Delhi, directly next to the Qutab Minar. It is about seven meters tall, and dates to the 4th century A.D. It is known to be from the Gupta Dynasty, and has writing carved into it.

This is what is known about the pillar.

What is not know is which Gupta this pillar represents, how it was made, how it came to this mosque, the first in Delhi, what the words actually say, and how in the world this iron pillar has hardly rusted at all after more than 1600 years of standing in a harsh environment.


There were several Guptas this pillar might represent, but they lived in Madhya Pradesh, quite a distance away. It is most widely felt that it's representative of Chandragupta II, leader of the Golden Age, a time of great prosperity and art. However, it has also been claimed to have been created under his son Kumaragupta, and to have been part of a Hindu temple built by him. Its placement in the mosque seems to have been as a trophy of some sort, so it is likely there was an attack, and that this pillar was kept and brought across the land as a memory of a victory. This would have been no easy feat, as the pillar weighs more than six tons.

This pillar is the largest piece of forged iron work that exists from this time period. It is ornate, with a tapered and designed top, and a bulb-shaped bottom firmly implanted in the ground. How did they put together such a large piece of iron?

There are several inscriptions in different languages, which for some reason have not been widely studied. It is felt that the oldest inscription is in sanskrit, and the translation is what led to the understanding that the pillar was part of a Hindu temple honoring Vishnu, and that it was built under the reign of a Gupta. The rest vary widely, and have not been fully documented, or so it would seem.


The biggest mystery, and the most debated (other than, possibly, which Gupta is being referred to), is why there is very little rust on a 98% iron pillar. The area it stands now is relatively dry, but there is plenty of rain, and humidity does get above 70% and 80% for short periods of the year. Yet after 1600 years, it still stands. There are other works of iron around India which have not fared as well, but are the same age or even younger. How is this?

Metallurgists have discovered a thin compound that appears to coat the pillar. They have theorized that it formed over the years due to high amounts of phosphorous in the iron. This is because the iron was treated with charcoal, rather than limestone used in modern times, which instantly turned it to steel instead of delaying the process. The longer it stands, the thicker this compound becomes, protecting it that much more. Scientists hope to use this method to create safer storage for nuclear waste. But does this explain it entirely?

Perhaps Vishnu, preserver of the universe, took a special liking to this pillar, erected in Vishnu's honor. What better proof of existence than this seemingly miraculous preservation?

What do you think? Does Vishnu protect the pillar or is it simply a different way of forging iron that fell by the wayside in modern times? Who was the original owner of the pillar, Chandra or his son Kumara? How did they transport such a heavy piece of iron so far in those long ago days? And why?

Fireside Magazine is taking submissions of flash fiction. 1000 words or less. Paying market. Deadline May 1. Any genre, as long as storytelling ability is strong.

Whortleberry Press has a series of anthologies they're taking submissions for. A Tribute to Ray Bradbury deadline is May 1. Strange Halloween deadline is July 31. Strange Christmas deadline is October 1. All genres sci-fi, fantasy, horror. $10 payment. 4000 word maximum for all.

Romance Flash is open for submissions at any time. Pays $3 per story. Under 1000 words.

The Short Story Imposium blog introduces readers to fiction in short form by putting up a new short story and author in each post, along with an excerpt. Great resource to find a short story or to have your short story found.

Letter I courtesy of OCAL, clker.com.