Choose Your Own Apocalypse Blogfest 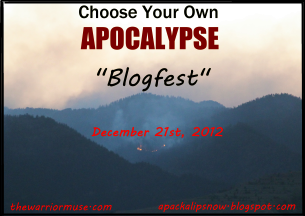 It started with the sniffles.

Whatever this bug is, it was spreading well before today, mutating with each new virus, each bacteria, each batch of antibiotics.

As it mutated, it became more severe, more easily spread, more resistant to any sort of treatment.

"Suck on some zinc," they said.

None of it did any good.  Nothing could touch the saligia virus, not once it really got going.


Some people were lucky.  They only suffered the physical torments.  Then they died.

Others were not so lucky.  The physical ailments were the least of their worries. They suffered intense nightmares, slipping into a state that brought their subconscious minds to the forefront, causing them to act on their dreams and fantasies.  They were increasingly affected by seizures and blackouts.

Each new iteration of the saligia virus spread faster.  At first, it was spread by drops of saliva, say when someone sneezed or coughed.  Then it was blood-born.  Ultimately, like strep, it became something that could be picked up on surfaces, and it lived longer and longer on these surfaces.

Then came the holiday season.

The turning point was Thanksgiving.  Families spread what they thought were simple colds as they gathered to give their thanks.

Black Friday took all of these now tainted folks into the public arena, in what would be an explosion of germ sharing, and the catalyst necessary to trigger this pandemic.

Those who worked in public service of any sort were exposed.  They, in turn, exposed their friends and family, and anyone who came into contact with them. More and more people reported a mystery bug that just wouldn't go away.

That was during the sniffles phase, of course.  After that, it was obvious this was no cold.

Packages and holiday cards were shipped out, exposing the mail carriers, employees of FedEx & UPS, recipients across the globe.  Others had already been exposed by people on international trips.

Each region the virus met changed it that much more, as exposure to that area's viruses and bacteria modified it at the basic level, causing it to metamorphose into a different mutant illness for each place.  The CDC had no way to connect such different symptomologies, therefore missing that it was the same virus on a global scale.

They figured it out today, with their official notice going out:

The Centers for Disease Control and Prevention (CDC), in conjunction with the World Health Organization (WHO) and localized health departments on a global scale, is investigating a widespread illness, exhibiting varied symptoms and morbidity rates.  If you are ill at all, even just a runny nose, please remain in your home to limit exposure.  If you do not have to go out of your home, well or infected, it's best if you don't.  The origins of this illness are unknown at this time. The various illnesses that appear to be tied together at the basic level are now being considered under the umbrella of the saligia virus.  This virus is highly contagious, via saliva, blood and contact of any sort.  There is no known cure or vaccine, though experts are hard at work to find one.  Due to the speed of viral mutation, this is proving to be a challenge.  Do not panic.  Take proper precautions to reduce your exposure.  A global pandemic has been declared.

This is the news that greets us today, as home after home falls victim to one form or another of the saligia virus.  If you have duct tape, seal your windows.  Wear a mask when you must venture out into the open air, especially if you will be going near other people.  The virus is strong enough to float on the wind for a significant period of time, and is able to survive harsh temperatures of both heat and cold. Reports are coming in that different species of animals are beginning to be affected, and with that will come further mutation of the virus, itself.  Nowhere is safe aside from your home.  Water sources may also be infected, as filtration systems don't appear to have any effect on the virus, and exposure would have been achieved in multiple ways.

This just in: Various types of livestock are already infected, and it appears they have been for weeks now, despite being asymptomatic.  Your meat may be infected.  Do not eat meat purchased after November 15th.   Discard it somewhere outside your home.  Eat only canned food, as produce has been exposed to possibly infected water sources.

I'm running out of plastic sheeting and tape here, and we have only five small bottles of water for hydration.  We'll have to chance the water we poured into the tubs before they declared it off limits or else we'll die of dehydration before we can possibly get sick.  Our canned and frozen goods are minimal, but we're eating the frozen produce first now that the power's gone out.

Our neighbors had a gas generator and were able to siphon gas out of their vehicles, but they were attacked this morning, the generator stolen.  We went over to check when we heard a ruckus from next door, but we were too late.  They were dead, all of them slaughtered for a generator.  Their pantry stripped clean.

Gunshots have been sounding from all around us for most of the day.  For now, we've got all windows and doors blocked, but from the sounds outside, it may not be good enough.  Their ranks are swelling.  As they say, nothing draws a crowd like a crowd.

We've only the one gun, and just 15 bullets.

Somewhere out there, fires are burning.  The smoke has begun to infiltrate our home. 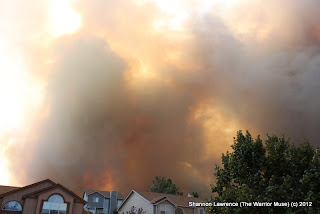 Sirens sound, but last time it wasn't even real firefighters, just some guys who had taken over the fire station and were driving around in the ladder truck for kicks. They ran over some people in the road, hooting and hollering the whole time, chucking beer cans at their bodies as they drove over them.

I feel a sniffle coming on.

You can still join until midnight tonight.  How did you foresee the apocalypse?