Since I've been alternating between photos of places and photos of animals, I guess it's time for an animal photo! 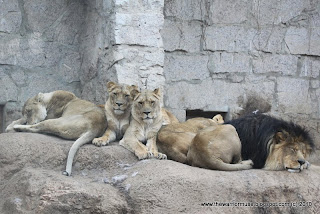 This pride of lions is from the Cheyenne Mountain Zoo, here in Colorado Springs. You can hear this guy roaring all over the joint when some jerk upsets him (for instance, he really hates it when people shine flashlights in at him during the night-time zoo experiences--so would I--I hope he busts through the glass and eats one of them).

But the real cool cats in this photo are the lionesses. They are the reason I have to visit the lions every time we go. They exude attitude. I've named them. I even have imaginary voices for them. Not kidding.

Last time we went, I got to see who the winning bad-ass of the lionesses was, as she took out two of the others over a bone. They went off into separate corners and pretended not to glare at her for awhile, but they never made another move. There was much nonchalant paw licking while they watched her out of the corners of their eyes, saying "You didn't scare me; I just don't want a bone right now. I was just after that little ant in front of you. Shows what you know, Mary Beth." The fourth one just shook her head (well, internally, anyway) and ignored the younguns while she cradled a piece of meaty bone none of the others appeared to notice. Seriously, she was hiding it, all wrapped up in her paws. I watched her cover it up when they walked her way. Smart.

Mary Beth also eyeballed my nephew like he was dessert. I got pictures of her staring at him while gnawing away, but they suck because of how badly damaged the glass is (or maybe it was just super dirty that day). She walked right up to him and continued eyeballing him. I'd rather not know what she said; she doesn't mess around.

The lionesses of CMZ rock.

And that's your [Mostly] (though [Hardly] might make more sense sometimes) Wordless Wednesday. I'm hoping for an opportunity to go get some fall photos now that some of the trees have started to change, but we'll see. Life is busy right now!

Don't forget to tune in Thursday for an interview with Andrew Leon!