I've been wanting to post this little guy for awhile. He's an Asiatic Black Bear, and I think he's adorable. 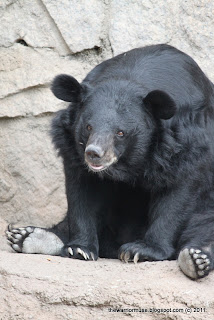 These guys are sort of hidden at the Cheyenne Mountain Zoo, but it's fun to visit them. The Asiatic Black Bears climb trees in their habitat, and the zoo does enrichment where they send a snack down in a paper bag on a zipline, which is always fun to watch, because the bears love it. You can visit the bears at the zoo or HERE.

These guys are found in, gasp, Asia! They like honey, just like Pooh Bear. Some interesting bear facts (not just Asiatic): A male is called a boar, a female a sow, and a group of bears is called a sloth or sleuth, which otherwise have entirely different meanings, of course. More info on bears HERE.

I'm a bit behind on responding to comments and visiting, but will catch up this week.

Also, I wanted to let people know about an event for kids and teens at the Citadel Mall, here in Colorado Springs, put on by Pikes Peak Writers in partnership with other groups. There will be crafts and creative activities for smaller kids, Hunger Games activities for teens, and visits from Santa and The Fairy Godmother. More information can be found HERE.

Lastly, I will be posting about a Flash Fiction Contest within the next couple days (Monday, at the latest). Keep an eye out! I'm excited to be helming this project for the Pikes Peak Branch of the National League of American Pen Women. The contest will be open to non-members, male and female alike, which is my favorite part! I'm not a fan of excluding any gender from events.

Any fun activities in your neck of the woods? Ever seen an Asiatic Black Bear? Aren't they the cutest?