Out of 5 chapters to edit, I edited 5! Yay! I also edited those five over and over, because I submitted my novel for the Pikes Peak Writer's writing contest.

And I'm okay with that! Not only did I get a piece ready for a contest, but I did so with a nasty tooth ache that ended up requiring "emergency" oral surgery. I put emergency in quotes since they couldn't get me in right away and I got to go all weekend in intense pain when it had already been three days of pain before I went in (which is, of course, my fault). I would say that is not so bad!

And for [Mostly] Wordless Wednesday, how about a beach photo? 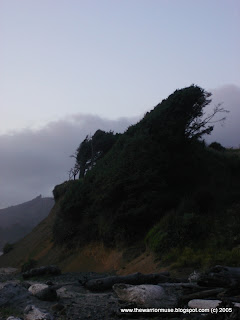 This photo was taken at Beverly Beach in Oregon, north of Newport (where Keiko, better known as Willie of Free Willie fame resided) and south of Astoria (where the Goonies was filmed.) I regret to say that, despite a childhood spent in Oregon, I don't believe I've ever been to the Goonies beach in Astoria. Sad, I know.

Unfortunately, I could find nothing about anything interesting happening at Beverly Beach. You can see the Yaquina Head lighthouse when you look down the beach, and the beach, itself, is gorgeous. There is a camping area right outside the beach, surrounded by these giant ancient trees. I felt like I was walking with dinosaurs when I hiked through the trees, and I got a ton of photos, though they were all point-and-shoot camera photos. I hope to go back and photograph with my SLR in the next year.

I will say, for those of you who like sea life, you can see whales, great white sharks, sea lions, and pools of sea urchins and starfish along this and adjacent Oregon beaches. I used to love watching the whales go by, though I've never seen a great white (fortunately or unfortunately?).

The photo's dark because it was night, but I liked how moody that formation was in the low light. Even though I can't see the water, I hear the waves, feel the breeze and smell the fresh sea air when I look at that picture. Those waves used to lull me to sleep at night when I stayed at my grandmother's house, and I wish I'd had the opportunity to go visit for awhile and write in the little loft to the the crashing of the waves and the the call of the seagulls.

The beaches in Oregon are unusual compared to beaches on the east coast (though my experience of each is limited to a few beaches). While there is fine sand at some of the Oregon beaches, there are also massive black rocks and large, rounded black pebbles at others. The water was always super cold, the wind a constant companion. Thanks to the heavily treed coastline, there were always bleached tree corpses littering the beach. You can see some less weathered trees in the photo above.

Ever been to Beverly Beach? Another Oregon beach? Do you enjoy the beach? Find it inspirational?