Since I'm currently visiting the Stanley Hotel in Estes Park, Colorado, the inspiration for Stephen King's The Shining, I thought I'd list a couple places movie fans might enjoy visiting.

First, of course, I must talk about the Stanley. Stephen King lived in Boulder, Colorado for a time, which is why some of his books are actually set in Colorado instead of Maine. He stayed in Room 217 of the Stanley, at one point, and was inspired to write The Shining, though he only developed the concept there. It has been rumored in the past that he wrote most of it there, but this isn't true. The Stanley was not used in Kubrick's film version of the book, but it was used in King's mini-series version for some of the scenes. 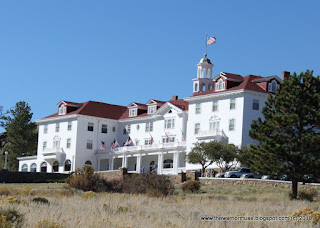 One can't mention filming locations and The Shining in the same post without also mentioning the Timberline Lodge in Mt. Hood, Oregon. This is where the exterior shots of Kubrick's version of The Shining were filmed. Stephen King wasn't happy with this setting, but a lot of people have seen the film, so it's worth mentioning. The interior shots were done on sound stages, which Kubrick made to look like various hotels he had visited.

Playing a bit of Six Degrees here, I've mentioned the sign before, but you can visit various places in Oregon where One Flew Over the Cuckoo's Nest was filmed. Jack Nicholson starred in both this film and Kubrick's version of The Shining. You can view the duck crossing sign in Salem, Oregon, as well as the Oregon State Mental Hospital it was filmed in. Depoe Bay, Oregon was also in the movie. It's a great little coastal city to visit along the Pacific Coast Highway, especially if you enjoy beaches, whale sightings and kite flying.

Also in Oregon, you can visit the neat little homes from The Goonies in Astoria, Oregon. Several other movies were filmed here, including Kindergarten Cop and Short Circuit ("No disassemble!") Getting back to The Goonies, you can view Mikey's house, still intact. The bridge from just about every movie filmed here is still standing and stretches across to Washington to give you a nice little jaunt across the bay.

Lastly, for you Harry Potter fans out there, how about a visit to Edinburgh, Scotland, where J.K. Rowling found inspiration for Hogwarts looking out the window of The Elephant House cafe. The photos are of The Elephant House and Edinburgh Castle, from one of hubby's business trips (No, I've never gotten to go there, but golly gee whiz, I did get a coffee cup from there! phlbbbbbbbbbbbbbbbbbt!). They were taken by one of his co-workers. I had to edit the hubster out of the castle photo, and the Elephant House photo is the only one he wasn't in to begin with, so they aren't the best: 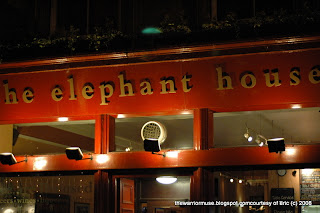 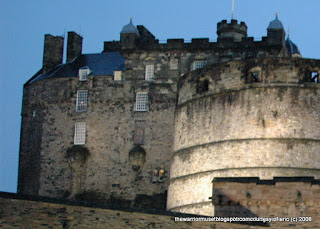 These are but a very few of the places you can visit to see visible remnants of the movies you love. Feel free to throw out any others you'd recommend!

What would you consider a great place for movie fans to visit?