I'm reading through three lists of best horror with two friends, posting reviews as we go. (For more information, including a list of the books, see this post.) To see the books I've reviewed so far, you can view the list at the end of this post where I rank them. I'm far enough in that I figured continuing to add the titles to this first paragraph would take up too much room.

This week I'm reviewing The Bottoms, by Joe R. Lansdale. 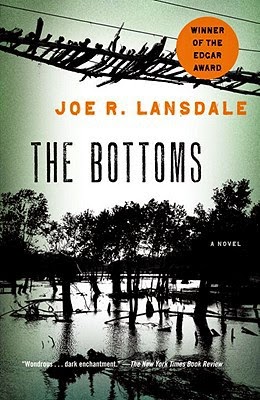 I must say, this was a welcome respite from some of the other books I've reviewed from the list. The first chapter gripped me immediately. It was chilling and tense.

The Bottoms follows a boy who is coming into his teen years. It's depression era East Texas, and Harry and his family live on the outskirts of an area known as the bottoms. Though the Civil War is long past and slaves have been freed, there is still segregation, with there being a regular part of town and the "colored" part of town. There's a local KKK, but for the most part everyone keeps to their part of town and leaves each other alone. The constable for the town is also a farmer and the owner of the local barber shop, and he still struggles to make ends meet. He's also Harry's father.

Harry and his sister head into the woods, intent on the awful task of shooting their beloved dog, Toby. A branch has fallen on his backside and paralyzed him. Seemingly intent to prove he's still useful, Toby leads the kids through the woods, he being pushed in a wheelbarrow, hunting squirrels for their supper. They find themselves lost deep in the bottoms where someone or something is tracking them. Harry tries to remain calm, assuring his sister he can get her home. But the woods are thick, and whatever's tracking them is getting closer.

Worried about their own lives, the children come across the mutilated body of a woman. Still being tracked, they must leave her behind for now, fleeing something Harry's convinced might be The Goat Man, a legendary figure in the area.

This is just the first chapter.

This story is the horror version of To Kill a Mockingbird. It's a coming of age story, a mystery involving serial murder, a lesson in race relations in 1930s Texas, a monster tale, and so much more. The dialect is well done, not overwrought as can often be found. The setting is clear and well developed. The tension and pacing are perfect. Harry is engaging, his family likable and believable. His father is fighting an uphill battle against the bigoted longstanding attitudes of the area; he's one of the few who treats colored folks with respect.

I found Lansdale's handling of race relations to be painfully honest. His black characters range fully between a poor, uneducated man who lives by the river in a one room cabin to a doctor who is brighter and more knowledgeable than the local white doctor, though only able to practice in the colored part of town. He's also the only one who has done any research into the psychology behind serial murder.

The white characters have just as thorough a range. The constable, as mentioned before, feels everyone is equal. However, he also admits to his son that he's not perfect, that he sometimes struggles with stereotypes and thoughts that aren't fair, and that he must constantly work to educate himself and battle these internal thoughts. There are others in town who feel the same as him, though not all are brave enough to show this publicly. Some offer silent support, some outright support, and others hide when bad things are happening. Even the racist characters differ widely, showing the reader the varying ideas people must have had, and the fact that it often takes a lot of hard work to overcome the ideals we're raised with. Some try to come to terms with their idea of humanity and the difference between the races, and others fully embrace their hatred of anyone different.

I mostly mention male characters above, but there are several well drawn female characters throughout the book, as well. I did notice that they didn't range as widely. As in, I don't recall there being a female character with the depth of flaws found in the male characters. The little sister is a strong little kickass girl, their mother is a good person, the grandmother is feisty, and the one person in town who began in slavery (the others are too young and/or just missed slavery) is a woman of wit and strength.

Lansdale is unflinching in his narrative. There aren't a lot of happy endings in this book, and he doesn't hide from the painful truths of the time, sometimes leading to devastating consequences.

My only nitpick would be with the occasional overuse of similes and metaphors. At first I enjoyed it, but then there were a few too many. There was one small slip in continuity that wasn't enough to pull me out of the story.

While I figured out one mystery early and waffled between two choices on another, suspecting that I knew the ending didn't ruin the book for me, either. I really enjoyed this book, and am looking forward to reading more by the author. I was gripped from the beginning. Whereas the last book I reviewed took me three weeks to read, this one took me three days. It was interesting to see a common modern story placed in a different era. The characters and circumstances fleshed it out beautifully, and I could feel the hot, wet air of East Texas in his descriptions.

One final note: if you enjoy how the story ends before the epilogue, skip the rest. I wish I hadn't read the epilogue. It brought me down. It is as unflinching as the rest of the book, but it takes away that little bit of hope a reader has at the end of a story, where the characters can go any direction in their lives. I guess this would be my other nitpick. I didn't like the epilogue, and I highly recommend skipping it unless you want to feel deflated by the futures the characters face.

I haven't completely decided what book to read next. Possibly Ramsey Campbell's The Doll Who Ate His Mother.