It's a Bird! It's a Plane! It's an Interview With Author Ian T. Healy!

An all around nice guy, Ian T. Healy is also one of the hardest working and most inspiring writers I know.  He manages to work full-time at a J.O.B, cook, spend quality time with his family, and be incredibly productive in writing.  In short, he embodies that which many of us hope to achieve.  Not only that, but for those of you on the fence between self-publishing and traditional, he has a leg in each world, running his own imprint, Local Hero Press, for his self-published titles in addition to be traditionally published.  You can read more about his experiences with dual publishing here.

With the release of his most recent novel, The Archmage, Ian stopped by The Warrior Muse for an interview. 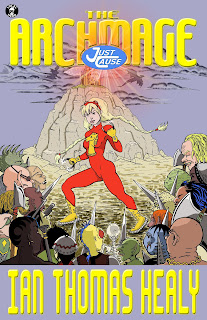 Tell us a bit about The Archmage.

The Archmage is a sequel to the novel Just Cause, starring the super-speedy Mustang Sally along with the rest of the Just Cause superhero team. In it, I explore the use of magic in a superhero setting. In this case, a character named Wolfgang Frasier has been slaughtering other mages around the world and taking their power for himself. He’s gotten so powerful that there is only one other mage remaining besides him, the hero Stratocaster, who is a member of the Lucky Seven hero team that Sally trained with at the beginning of Just Cause. If Frasier manages to kill Stratocaster, his power becomes absolute and he could plunge the entire world into darkness, becoming its total ruler. This is, of course, his goal. Sally and the other heroes have no choice but to try to stop him, even though his power is so great that he can call armies of the dead out of the ground and turn anyone captured to his side. There’s a nifty bit of time travel thanks to magic going awry that sends the team back to the 1870s, and of course some great intrigue and epic, cinematic battles. At the same time, Sally’s relationship with Jason is growing much more complex and suffering growing pains all its own. What is Local Hero Press?

LHP is an imprint I created specifically for the release of my novel-length work and collections. I didn’t want to simply release them under my own name as the publisher because with such a wide variety of genres under my belt, I wanted something to tie them all together. This way, if someone buys The Archmage, likes it, and looks to see what else LHP has to offer, they might discover Blood on the Ice or Pariah’s Moon or Troubleshooters.

You do write in a variety of genres. Tell us about some of them.

I don’t like to be pigeonholed, so I don’t force myself to stay in one genre if I’m interested in writing in a different one. This goes against common wisdom of building a brand, from what I’ve seen on the internet, so I’m forming my own uncommon wisdom instead. That again ties back to the LHP imprint by creating a common thread beyond just my name. I follow my muse, so I’ve gone from superheroes (Just Cause, The Archmage) to funny science fiction (The Milkman), to cyberpunk (Troubleshooters), to fantasy/Western (Pariah’s Moon), to urban fantasy sports (Blood on the Ice), to religious symbolism (Hope and Undead Elvis) and even more. And if my agent sells The Guitarist, I can add “Mainstream Young Adult” to my genres.

You have an agent? But I thought you were self-published.

I do have an agent, Carly Watters of PS Literary Agency in Toronto. She represents my Young Adult work only, and when we discussed the possibility of her representing me, we both agreed that she could still effectively represent a portion of my work and I could still effectively release my speculative and adult fiction without interfering with one another. I am, in fact, searching for a second literary agent to represent The Oilman’s Daughter, the epic steampunk/space opera that I coauthored with my dear friend Allison M. Dickson.

What’s it like working with another writer so closely on a project?

I’m not sure I have anything better to compare it to than a successful marriage. We worked very closely together on the project (two time zones separating us notwithstanding!). We had complete trust with each other, and were able to discuss what should have been extremely divisive and difficult issues not only with calm heads, but with a sense of joy that only two opposing viewpoints between dear friends can bring. The best thing about working with someone like that is going back through the manuscript and not being able to tell exactly who wrote which parts. That’s just awesome.

One thing that never ceases to amaze me is your productivity. What is your secret for finding time to write and making it happen?

My secret for finding time to write is to always be writing, whether or not I'm actually performing the act of putting words onto a page. James Thurber told this tale, which exemplifies my own philosophy quite nicely: I never quite know when I'm not writing. Sometimes my wife comes up to me at a party and says, 'Dammit, Thurber, stop writing.' She usually catches me in the middle of a paragraph. Or my daughter will look up from the dinner table and ask, 'Is he sick?' 'No,' my wife says, 'he's writing something.'" That's me, totally.

About how long do you typically spend on your stories (short and novel length), from conception to publication?

Short stories I tend to write in no more than a couple of days. When I get one of those ideas, it becomes pretty much all-consuming until I finish it, so I work pretty fast. Novels for me range wildly from taking only a month to several, depending upon how hard I'm working on them and how many other things are going on in my life and my writing/publishing business. I'd say that three months is the average time I spend writing a novel (NaNoWriMo tends to skew that average shorter).

I'm afraid it's time for the last question: What advice do you have for aspiring authors?

Write. A lot. Write some more. Then, for variety, go for a walk. Then write some more when you get back. Show your writing to your friends and family. Ignore what they say about it. Show your writing to someone who doesn't have any reason to sugar-coat their criticism. Take it like Kevin Bacon in Animal House and cry out "Thank you, sir, may I have another?" Then go write some more. Talk to writers further in the process than you are, but don't become a drain. Write some more. Go to conferences. Write some more. Read industry blogs. Write. Turn off the TV. Write. Are you sick of writing yet? If you are, then you're not a writer. Take up a new hobby, like badminton or philately. If you're not sick of writing, try to write so much you'll make yourself sick of it. If that doesn't work, keep writing. Also, learn how to edit, critique, market, produce and publish your own work, query your work to agents, editors, and trade publications. Learn everything you can about the industry and recognize that you will never get to stop learning. And you will never get to stop writing. What, you're still here? It's over! GO WRITE!

Thank you for stopping by on your book tour, Ian!

The Archmage, book 2 of the Just Cause Universe series, launches from all online retailers on September 1, 2012. Exclusive signed editions can be purchased directly from Local Hero Press.