Rachel Morgan is stopping by today!  She is the author of the YA paranormal fantasy novelette series "Creepy Hollow."  You may also remember her as the 2012 A-to-Z Video Challenge Winner.  I was interested in why she chose to do a series of novelettes, rather than a regular ol' novel, and she was nice enough to let me know, despite being in the middle of wedding planning.  Here's what she had to say:

Wikipedia gives the following information regarding the Science Fiction and Fantasy Writers of America and their Nebula Award categories:

People seem to use the terms novella and novelette interchangeably, as I’ve seen “novellas” out there that are under 17,500 words. At the end of the day, I don’t think it’s too important exactly what you call it, as long as readers know what length of story to expect.

So why did I decide to publish several shorter stories instead of one (or more) longer novels? Well, there are several reasons:

1)  I noticed that most successful self-published authors have a list of published works behind their names, not just a single novel. So I wanted to do that too, but it would take me years to publish several novels. So I figured the easiest way to get multiple titles out into the world in a short-ish amount of time would be (obviously) to make them short works.
2)  I’ve always loved series, and not just book series, but TV series too. Watching characters and relationships develop over multiple interlinked stories is fun—and kind of addictive!
3)  Writing, editing, polishing and formatting a story of around 20,000 words is a lot more manageable that doing all of that for a massive novel!

So for Creepy Hollow, I took all those reasons and put them into a series of episode-length books, to be published at regular intervals (which has now stopped for a few months, because planning a wedding seems to take more time that I’d anticipated!)

The Response from Readers

The response has been mixed, actually! Some have said in their reviews that they enjoy a story that’s short enough to fit into a single evening / busy reading schedule. Others have said that the stories are too short and just as they’re getting into them, they end.

Would I Publish Future Series in the Same Way?

Hmm ... Right now I’m thinking no, but I suppose I shouldn’t rule out the possibility! As a reader, I can understand why most people want a longer novel rather than receiving a story in little bits. Also, while it’s easier to write and edit shorter works, it’s a lot of effort to produce (cover, ISBN, launching each time) multiple books. There is definitely a place for novellas and novelettes, but perhaps it’s better to keep shorter works as companions to series of longer novels? What do you guys think?!

PS - In case anyone's interested in word counts, here they are: 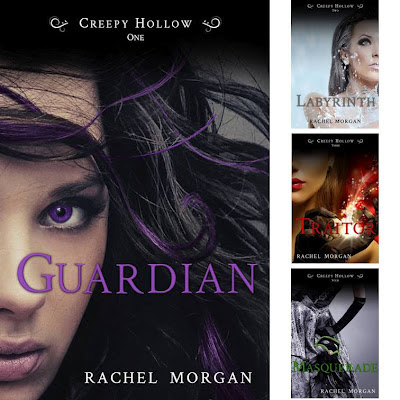 Kick-butt faerie girl + cute human boy who shouldn't be able to see her
= trouble for both of them!

GUARDIAN is now *FREE* on Smashwords, and should hopefully be free on Amazon soon too!

Thank you for stopping by, Rachel, and for a compelling post!