Today's [Mostly] Wordless Wednesday will be two-fold.  First, I just wanted to share a bit of what my city looks like right now.  There are a couple wild fires going, one having surpassed 59,000 acres and 181 homes destroyed.  While we've had smoke from that fire some days, depending on the direction of the wind, there is now a smaller fire burning about 40 miles from where I live.  That one is at about 1100 acres, but it's pumping smoke into the Pikes Peak region quite heavily, at least at times (again, depending on winds).  I snapped a couple sunset pics the other night as I was driving home. 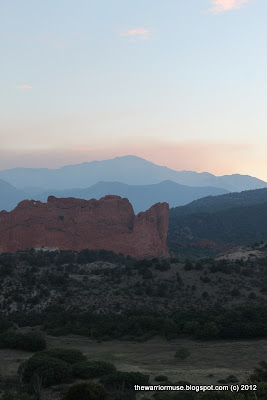 A smoky view of Pikes Peak and Garden of the Gods.

A southwest view down the Rockies, barely visible, with a portion of Cheyenne Mountain at the far left.


The good thing is that there has only been one death from the fires, though that is one too many. I'm desperately hoping for some rain all around the state, but we are in a perpetual drought, so rain is fairly rare.

Despite the lingering smoke, the kids and I still went on our weekly adventure field trip.  This week's trip was to the Fine Arts Center and the American Numismatic Association Money Museum.  Unfortunately, only the Fine Arts Center allowed photography, but I thought I'd share a couple of those photos.

(Yeesh, I went through selecting photos and chose waaaay too many, so I will try to trim it and pass along far fewer.) 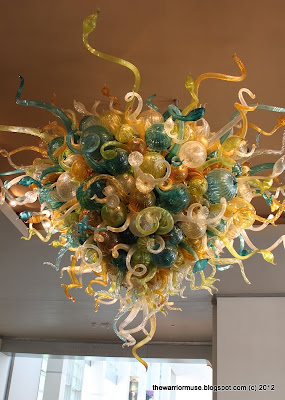 As you walk in the front door, you're greeted by a chandelier made by Chihuly. I really regret having missed his show there a couple years ago. 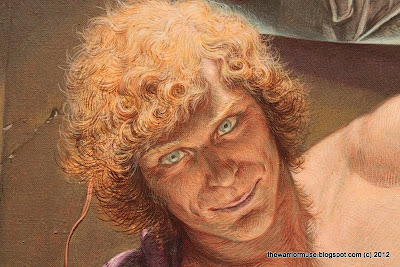 This is a close up of a bigger painting, which is vivid and amazing on its own, but I find something so compelling about his face. This is David from the painting Study for a David and Goliath, an acrylic painting done by Paul Cadmus in 1971. 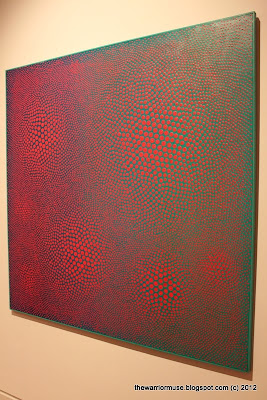 Ow! My eyeballs! I tell you, I could not look at this painting without getting dizzy. This is Vibrations of Scarlet on Blue and Green, No. 5, by Vance Kirkland, 1967, oil on canvas. 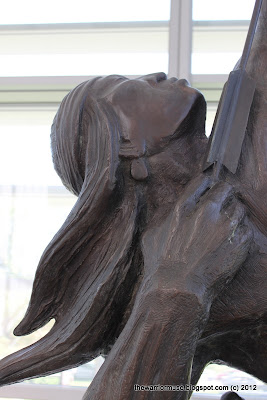 This is a portion of the sculpture Sacred Rain Arrow by Allan Houser, 1988, in bronze. 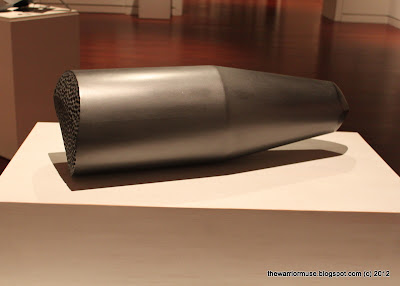 Last one! I had to pass this along for my fellow writers out there. This is Monster Pencil Tip: An Endlessly Enlargeable Monument to Human Imagination, Interrupted - Pay no Attention to its Highly Suggestible Shape, by Sean O'Meallie in 2005, polychromed wood. The highly suggestible shape is that of a warhead. To quote the placard: "Implicit in this dual appearance is dual meaning: the productive nature of a pencil with the destructive reality of a warhead. [...] as the words scrawled by a pencil can be more dangerous and destructive than any bomb."

There were so many things to choose from! It was definitely worth the visit, and I'll happily go again and pay (it was a free day). My kids, ages 7 and 4, loved it, as well, which I was a little surprised by. I was afraid they'd be bored, but nope!

Now, if you made it through all of that, here are this week's links:

Does anyone remember when I was on that kick to find a program that would allow me to hear typewriter sounds while writing?  Well, here is another one!  And this is also one of those lovely programs that puts you in a distraction-free screen while writing.  I haven't tried it yet, but it was recommended: Write Monkey

If you're writing memoirs or something set in the past, this dMarie Time Capsule is pretty awesome.  You can plug in a date and the time capsule will pull up pertinent information that helps you set the scene, such as music/movies of the day, headlines, prices, the president, etc.  Very interesting.  I just got sidetracked because I plugged in my birth date.

Shelf Stealers runs a monthly writing contest, but there is a $5 entry fee.

WEbook is running the Nameless Icon Writing Contest, which challenges you to write a description of an iconic person that people will recognize without being told the name.  Sounds like a fun activity!

Wily Writers Audible Fiction has an interesting twist and is a paying market.  They publish your piece in both text and audio.

Once Upon an Apocalypse is looking for stories for two different anthologies, both dealing with mixed up fairy tales/nursery rhymes, with one wanting them zombified and the other Lovecrafted.  Paying market.  Deadline July 31, or first filled.

Ticonderoga Publications is a paying market, taking submissions for an anthology with the working title Dreaming of Djinn.

Woo!  Did you make it through all that?  I hope there was something helpful for someone in all this!  On Monday I'll be passing along some fantastic information from the Write Brain I attended last night, dealing with computer security for writers.  I will also pass along the author/presenter's website, where I believe you will have access to his handouts.  It was a fantastic workshop!

Anything helpful in here?  Did you have a favorite of the pieces I posted?  How are the temps/weather in your area?