This week I'm reviewing The Bridge, by Craig Spector and John Skipp. (I had said I'd be reviewing "Ghoul," by Brian Keene next, but I forgot I said that, and I picked this one up from the pile instead.) 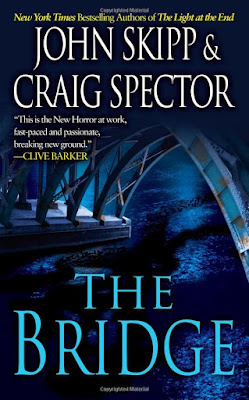 I'm not new to splatterpunk, but I am new to eco-horror. Oddly, eco-horror is not my favorite sub-genre (I say oddly, because it's just a different type of apocalypse, and I enjoy those). However, I enjoy the way they wrote enough that being brow-beat about the environment (not that I disagree, but I tend to be turned off when it feels like I'm being preached to) couldn't put me off the book.

They had such a fantastic way with words that at times it was almost literary, but then the gross-out factor was high. The descriptions were disgusting and amusing, often at the same time. They elicited groans and "ew"s from me several times, which I love. It was quite a visceral experience.

The book was about toxic sludge pollution becoming sentient and wiping out a town. It takes over people and uses them to grotesque purpose. There were a lot of characters to keep track of, so though the good guys stood apart in my head and stayed separately identifiable, some of the bad guys blended together for me at times, because they're all being taken over, which means they're the Overmind, but maybe it's intentional that they blended together, though they retained their original names.

Despite the minor complaints above I liked this one enough that it's going in my top ten. Now to figure out where...


Okay, maybe next time it'll be "Ghoul," by Brian Keene.

I'm gonna be honest and admit that I'm never going to read that.

I haven't read any Skipp n Spector books, but thank you for this review. I do enjoy the horror genre, especially gothic horror and literary horror. Now I'm going to go check out your list of books link. Thank you!

I'm trying to wrap my head around that sentient toxic sludge.

Have you read Scythe? It's speculative dystrophia, and I'd rank it right up there with Handmaids Tale.

I'm not sure I've posted one you've expressed interest in, but now I can't remember.

This was the first Skipp n Spector book I'd read, though I'd intended to for a while.

I haven't, but need to check it out! Anything comparable to Handmaid's Tale is worth a look, thanks!