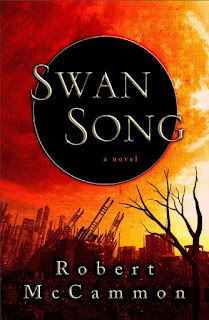 Unless I missed it while scanning back, it's been since June that I reviewed one of the books from the horror list. Yikes! But I've read other books in the meantime.

First, I need to say this was another loooong one. Nearly 919 pages. It took me awhile to get into it (about 240 pages, if I'm remembering correctly, which is about the time I went, "Oh, now it's getting interesting.") I didn't care for all the setup, and it at first seemed like it was going to be too regimented and militaristic due to the focus of the story at that time. It did get more interesting, however, and the momentum built continuously from there.

Interesting side note: I was reading this when the North Korea tweet occurred, and people were talking about nuclear attack. Why is this interesting? Because the story is about Russia (it was written in the 80s) nuking the entirety of the U.S. from ships. They hit all the big cities. All infrastructure is wiped out, and the survivors (barely) are forced to help themselves, rescue themselves, deal with the effects of the blasts, find food, find water that isn't tainted, etc. It was a timely reading.

While it's a good book, McCammon does a lot of head hopping, even within paragraphs, and I found this wearing. For the most part, it was easy to follow who the new POV character was, but there were many times I had to go back and re-read to figure out why an action had come from someone I didn't expect it to. So how many head hops did I miss because nothing triggered me to think something was wrong? There were A LOT of POV characters. We saw into the heads of both villains and hapless heroes.

The characters were interesting, though the bad guys were edging toward caricature. The good guys were mostly highly likable, though, and it was those people who kept me reading, because I needed to finish out their stories.

If you like post-apocalyptic, this is one hell of an apocalypse. We meet the characters just before everything goes down, ride through the nuclear attack with them, and then see their progress for, I think, seven years. It's quite similar to "The Stand" in that it's an examination of good vs. evil in dire circumstances, with characters journeying across the U.S. to the place of their final countdown. There is also an element of magic woven throughout, with several of the characters having the ability to see each other and even a bit of the future using magical items. Plus, the big bad guy is somewhat magical, as is the major good guy (Swan).

If you can muck your way through the beginning, the rest of the book is worth the read. I happened across an online discussion about the book while I was struggling to move forward, and this was repeated over and over. It gets better.

I'm not sure which book I'm reading next, but it may be by Robin Cook.

Have you read Swan Song? Did you like it? Was the beginning hard to get through, or did you not have the same problem?