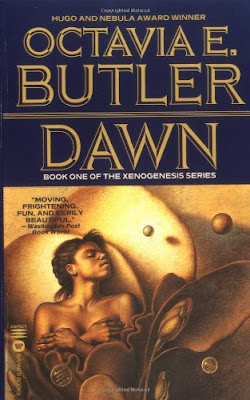 First, I'm going to get this out of the way: not horror. It's science fiction. I'm going to review it anyway.

It was an interesting story. A woman awakens in a strange enclosed space. An alien lifeform with tentacles on its face tells her she must grow used to its form before she can leave the room with living walls. It is explained to her that humanity all but killed itself off, but that these aliens, the Oankali, grabbed up those few survivors remaining and brought them up to their ship. It has been centuries since they picked them up, keeping them in a sleep while the Oankali repaired the Earth.

This woman, Lilith Iyapo, is expected to allow genetic modifications and then to lead a group of humans in training so they can all return to Earth. But humans being humans, they don't understand what has happened, and they meet Lilith with varying levels of aggression, disbelief, disgust, and hatred.

In this way, the book can be considered a type of intellectual horror, like Lord of the Flies. It's an examination of humanity, and an ugly look at the self-destruction of humans. Put a group of them together and see who destroys who first.

Two types of rape are addressed in this story: an attempt at physical rape and actual psychological rape (you'd have to read to understand what I mean by this). Relationships and sexuality are also explored.

What little hope there is in this book is overshadowed by the horror that is humanity. However, it's a fascinating exploration of both humanity and what could be with alien life forms who mean well in some ways, but also have their own agenda. At times, the humans meant to be "bad" were too severely bullying for me, and I didn't always agree with the actions of the main character, but it was overall a good book. It became slow at some points, but picked back up. I wouldn't continue reading the series, but I would pick up a different book by this author. It should be mentioned that science fiction is my least favorite aspect of speculative fiction, and not a genre I read much of. If you are a sci-fi buff, know that this is not hard sci-fi. It is more about culture and psychology.

The next book I'll be reviewing is IQ84, by Haruki Murakami.

Have you read this book or anything by this author? What did you think? Did you find the breakdown of "humanity" to be realistic? What would you agree to if you woke up on a spaceship? Any other books by this author you'd recommend?

Fun to see you review this one. Octavia Butler is one of my all time favorite authors. I've loved everything she's written.

Definitely sounds intriguing! I've heard of Butler but can't recall if I've read anything by her.

I've never heard of this book, but now you've intrigued me.

She's an interesting writer, but I've only read a couple of her older titles.

I'd like to read more by her. This was my first!

This is the only one I've read by her so far.

I need to read one of the different types.