November is Native American Heritage Month, and in celebration I asked a friend of mine who is also Native American to write a post about her experiences with editors who weren't aware she was Native, and the issues of only dealing with someone through correspondence.


In honor of Native American History month, I’d like to cover the difficulties of working with an editor through correspondences.

As if being Native American/American Indian/Indian, or any other term assigned to the Native tribes of North America, weren’t difficult in and of itself, writing about characters of the same nationality presents its own set of problems. We, as writers, strive for accurate representation of each person we create, no matter their nationality, religion, or political standing. The task is daunting and requires constant research. And the powers that be only know that there have been plenty of mistakes made!

Add in the filter of emails from editors. Someone we’ve never met, with no knowledge of background or upbringing, reads our stories and picks out what they think needs to be changed. Race is a touchy subject in person, what with our melting pot of a country making it impossible to accurately gauge someone’s actual ethnicity. But not in person? No way. So when you get a note about calling your character Indian, that it’s an offensive term and shouldn’t be used, especially when following the statement of not knowing if you’re Native, it can push some serious buttons. Multiple buttons if it’s mentioned more than once. Which it was.

I promise that I behaved. Counted to ten and all that. But in the end I had to explain to the editor that I was indeed Native, that I’d grown up around a family that openly called themselves Indians, and said that as long as the person using the term was the “Indian” in question, it was acceptable. This made me question terms and how they’re used in general. What should matter isn’t the term itself, but how the person speaking it wishes it to impact.

There are gray areas with any term, catch phrases, colloquialisms, and slang that have ever existed. So no matter what, there will be the possibility of causing an offense. But what we all should be concerned about is looking beyond the words to the intended meaning. Writers, readers, critics, trolls, and anyone else that would like to voice their opinion about it.

I love being Native. I love my heritage so much that I’ve written several pieces of fiction with Native main characters. Do I strive to be respectful? Yes. Do I wish to keep it realistic? For sure. Will I stop using a term because I think it may hurt someone’s feelings? No. Look beyond the words and see their meaning and purpose. I have a duty to use my gift and deliver stories that inspire higher thinking. No matter the nationality, I will do my best to do right by my characters as they’re meant to be written.

Nicole is one-half of the team who wrote Hoofbeats. 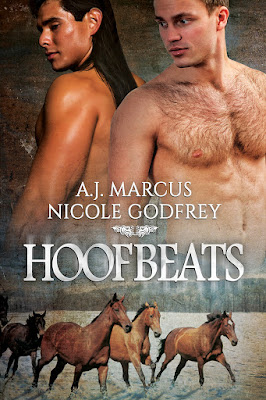 Blurb:
After a run of bad luck, gifted horse trainer Cole Frasier thinks he’s lost his touch. When he’s offered three times his normal rate to gentle a stallion, he needs the money badly enough he jumps at the opportunity, even if his boss is of questionable morality.

Once he meets Midnight Blood, he knows there’s something special about the horse, but he doesn’t know how special until he begins sharing dreams with the magnificent steed.

Derek Dancing Hawk is a horse shifter trapped in his horse form due to guilt over losing the wild herd he was guarding. When he meets Cole, as Midnight Blood, he wants to find a way to be human again. During a fight between Cole and the ranch foreman, he manages to shift and save Cole, but his transformation from horse to human is captured on camera. This not only gives Cole’s boss blackmail material, but also creates the need to warn the horse shifter council of the threat to their anonymity. The existence of shifters is a closely guarded secret, one they will go to great lengths to keep. 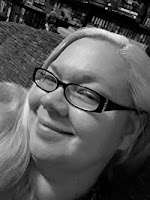 BIO: Nicole Godfrey is a writer who calls the beautiful city of Colorado Springs home, along with her furry children. She was born in Omaha, NE. and has lived in Florida and Tennessee. Her writing career started with poetry at a young age, leading to her first publication at the age of twelve. Poetry eventually evolved into the love of storytelling, and any good story, no matter the genre, is open to her creative mind. She has two short stories published through Colorado Springs Fiction Writers Group; A Page Lost in An Uncommon Collection, and The Power of the Word in Remnants and Resolutions: Tales of Survival.

When she’s not writing, Nicole actively participates in Amtgard and loves to play table-top RPG’s. Art has also been a part of her life since a young age, so she spends as much time as possible playing with different mediums.
https://www.facebook.com/authornicolegodfrey1983/?ref=br_rs
authornicolegodfrey@gmail.com
@NicoleGodfrey


Have you had issues with editors being wary of something you were writing? Any issues in writing race? Any of these links of interest? How is NaNo going? Anything to share?

Congratulations to Nicole! And thanks for the links. I need to get more stories submitted before the year is up!

Congratulations, Nicole!
I didn't realize some thought using the name Indian was offensive.

Congratulations Nicole! I strive to be respectful and mindful. In writing, things are a little different. You have to be true to the character--and they might not be so nice.

What an interesting post. Thanks for the perspective, Nicole. And I love to visit Colorado Springs. It is indeed lovely.

Great story about working with an editor and the use of the word "Indian." I actually had that come up in a manuscript myself, so it's good to hear it from another's perspective.

The point of view is interesting, would catch the reader. a most unusual book, Nicole.

Congratulations, Nicole. I love what you said, "Look beyond the words and see their meaning and purpose". Here In South Africa race is such a touchy subject too. I'm mixed raced, in South Africa referred to as Coloured, but in the rest of the world it's a no-no. I love being who I am too, mixed race and all. Thank you for sharing your own experience.

You can offend anyone with anything these days, if people looked to the context of it instead of jumping to "oh that offends me" would be better indeed.

Good for Nicole for sticking up for herself. Personally I've heard too much about un-pc names for people, unauthentic ethnic portrayals, and "triggers" in books and think it's time people settled down and remembered it's FICTION! Next thing you know there'll be a Vampire Lovers group of loonies writing all authors of vamp stuff, telling them it's wrong and threatening a boycott. And if someone finds a book or movie too emotionally difficult to handle -- stop reading or turn it off. Don't keep reading and then go on FB to tell all your friends how damaged you are after reading it.

Nicole's book sounds exciting and romantic - wishing her much success!!

Great point, Nicole. As an editor, if I ever see something in a story that I question or am curious about, I point it out. I don't force the writer to change anything, though. It's their decision. And you're right. It truly does matter what the intended meaning is.

Nicole, your book sounds quite intriguing. I've long been wildly interested in Native culture and the idea of fictional stories is fantastic! Write On;-)
Thanks for the links, Shannon!

Love this! The part about being damaged by a story or a film makes me break into laughter. Seriously?

I think every editor has to tread lightly when it comes to racial terms and it's a very treacherous ground as to how readers will respond. Things don't have the same impact in the spoken word as they can in writing.

This was a great read! I love how well you presented the topic. Thank you for sharing your thoughts on it. :)

Editors really need to be sensitive about political correctness. Your post about it is very well-written.

How did you end up doing?

Yes, some do, and they have the right to. But not all do. It goes back to that having been what Natives were called when they thought they'd found India. Since it was the wrong name, it bothers some.

It was a great perspective to have!

Was it specific to Indian, or was it a different term like that?

It's interesting that even with the Native community, the view differs.

I wouldn't have known the proper reference was coloured in SA. You're right that here it's a no-no, which may be because of the history behind it (like redskin). It became derogatory.

Yes, that's always true. And sometimes an insult really just comes from a place of ignorance, so taking the time to follow that up can be good.

It's definitely reached an odd level. There's being respectful, and then there's being choked by being unable to say anything wrong ever.

I think that's what a good editor does.

Thanks for stopping by!

Thank you for stopping by!

I imagine they need to check to be sure, because they don't want it to bite anyone in the rear.