This week I'm reviewing The Stranger, by Albert Camus. 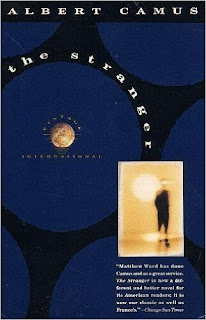 The only way I can figure this ending up on a best of horror list is because the dissociation of the main character is frightening to those of us who do feel. Or possibly because what happens in the end isn't necessarily just, but is more about people not understanding someone whose thought process is so alien from their own.

This was an incredibly fast read, well written. But it was not scary. It was certainly thought provoking, philosophical, but not horror.

The main character, Monsieur Meursault, goes through life in an apathetic fashion. Nothing bothers him. He is bored. He drifts, really, not fully living. Yet he does have some feeling. He can desire a woman, for instance. But he can't love her. Nor could he love his mother in the sense that most of us understand.

In the beginning of the book, Meursault is concerned because he has to ask his boss for time off. But his mother has died, and he reasons that his boss can't be too angry since it's for a good reason. He doesn't grieve for his mother, something those around him don't understand. Having been in a situation where my grief was delayed, I really didn't find this so bizarre. It happens.

However, it keeps happening. It doesn't bother him that a neighbor abuses his dog. Or that another neighbor beats his girlfriend and shames her. In fact, he becomes friends with this guy, which ultimately draws him into a situation where he kills a man. The rest of the book is about the court case, where they pull all kinds of witnesses who report that he didn't cry at his mother's funeral, that he had sex and saw a comedy with a woman within a day of her service, that he supported a man who was beating his girlfriend. The reader sees that it isn't so much because he's a bad person, but because he views things differently, but the jury can't see this.

I left the book conflicted, which is, I believe, what the author wanted. I'm really not sure what to say in terms of the horror list review since I maintain that it isn't horror, but commentary. It's worth a read if you find the premise interesting. I've linked to the translation I read, since there are multiple. The book was originally written in French. Camus was Algerian, and that is where the book is set.

So...read it if you think it sounds interesting, and you want to follow along with a man immersed in apathy. Don't read it for a scare or any type of horror.

The next book I'll be reading is Penpal, by Dathan Auerbach.

Have you read this book? Was it by choice, or as a school assignment? What did you think? Did you think he deserved the ending?

I've never read Penpal, but I may look it up, along with others on this list. Horror book are always great reads, for me at least. I love the feeling of the hair standing up on the back of my neck (weird, right?). "Lucifer's Son" by Sergey Mavrodi, http://www.mavrodisergey.com/ is worth checking out if you're looking for a good horror read. Thanks for the honest review and for this list.

Gosh I wish I had the ability and nothing bothered me. But no, everything bothers me! LOL
Great review!

It would be strange to go through life with such a personality. Sad. Scary.

Well, this one sounds interesting. I probably won't read it, but I will have wanted to have read it.

Hi Shannon - Interesting book and especially the review ... something we should probably all read - so we can understand these personalities. Humans are such a mix - and we so often think we all fall into the same category - yet as here a few fall out of the norm. Difficult to relate as there's no obvious outward difference ...

Thanks for this - cheers Hilary

A fast read, well written book is just the way I like books. A most comprehensive review by your good self.

I hope you have a nice rest of the weekend, Shannon.

Nah, it's not weird. Why else would we read horror if we didn't like the feelings it stirred? Thank you for the recommendation!

I'm unable to visit you back. It takes me to Google, which blocks all info from me. :(

After reading that, I don't think I'd want apathy. It would sure be nice not to feel quite so much, though, wouldn't it? No apathy, but maybe a little less empathy.

I agree. But would you know to be saddened by it?

I guess that's something. :p

Yes, the author certainly delved into something that makes a reader with empathy squirm and question themself and others.

I like that kind of book, too, especially when so many of these have been a struggle to read.