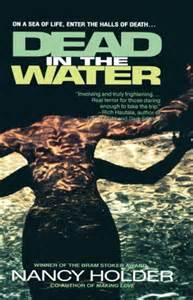 Thank you for the review. I will have to add this one to my TBR list for when I'm in the mood for horror. :) Have a great weekend!

Great review. I was just wondering do you ever have nightmares? I mean that's a lot of horror and I always have nightmares when I read it. So, of course I don't read it as often as I'd like. Silly me. I do enjoy reading it, but not the nightmares. :)

Have a great weekend, yourself! And Christmas. I'm not sure yet whether I'll be blogging this week.

Horror doesn't give me nightmares. In fact, I don't get them from reading or watching (or writing) anything. I do have nightmares, but they're ones like tornadoes and the like, when things are out of control in life. Sometimes it seems like horror gives me an outlet to calm the nightmares down.

Sounds like one that was done really well. Always good when no one is safe from the big bad, make it more suspenseful I find.

More for my lists!!

Some really good and scary books on this list! Love Nancy's writing.

"Dead in the Water", judging by your review, sounds like just the sort of creepy book I'd read.

Hope you are feeling better, Shannon.

I pace myself with horror, but you seem to have dived right into it!

Wishing you a very happy season of blessings, and a wonderful new year.

I have not read this and don't think I have read anything by this author. Sounds like a great spooky read. I have read only two books from your list- but LOVE them both: The Handmaid's Tale and Coraline. :)
~Jess

This one is new to me. I'll admit that with an uninventive plot and a generic title like that, I wouldn't have gravitated towards it on my own. Good that it's a quick read, though!

Haven't read this one, but I did read The Handmaid's Tale last year. What a creepy book. Hard to forget some of the images.

Is there one you'd recommend?

I'm functioning, which is good enough! How are you?

I wish the same for you. Congratulations on The Forge!