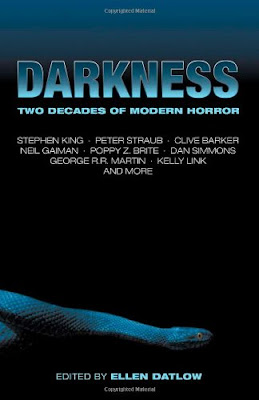 Oddly, I didn't enjoy this one as much as The Year's Best Fantasy. This is weird because these stories are primarily taken from the "Best/Best of" books. I recognized most of the authors, and I liked them fine, but I didn't end my reading with as many stories that struck a chord as with the last one. This collection was meant to be representative of the best of the best, so it may have just been that my favorites by each of these authors may have been different than the choices made in the book.

Having said that, there were no weak links. No stories that I was unhappy with, or that I felt didn't deserve their spot.

It may also be that there were a few I had read previously, so there weren't any surprises for me in those stories. Often, it's the twist or surprise in a horror story that excites me.

This was another one that taught me a few interesting things about the recent history of horror in the introduction. Specifically, I learned something about the origins of Splatterpunk (when it broke through, who pioneered it, etc.).

My favorite story was Two Minutes Forty-Five Seconds, by Dan Simmons. It was set up beautifully. The reader has an inkling of what's going to happen, yet is still surprised by it when it does, because it's not quite what they thought. Set on an airplane, the POV character is an engineer obsessing about how long it takes a plane to go down, as well as some other equations he runs through. See, I bet you think you know what's going to happen now, right? You do. But you don't.

Kelly Link's The Specialist's Hat. Creepy, atmospheric, historic setting. A father who moves his family into a house with a history to write about the man and his daughter who disappeared from this house. Good use of isolation, confusion, and the openness of children's minds.

Terry Dowling's Stitch. Freaky surprise near the end. A twist the reader doesn't see coming. A woman is terrified of a cross stitch bit of art on her relatives' wall. Specifically, a half-formed shadow man in the background--Mr. Stitch. Tied to a horrible experience she had in the house, the two come together in an unexpected way.

Glen Hirshberg's Dancing Men. Ties together a Navajo ritual and a Jewish golem ritual. A boy must go to his grandfather's hogan to help with an Enemy Way. Grandfather, a gypsy victim of the holocaust, is dying. The story works its way up to revealing a surprise from the past, and something that explains some of the boy's troubles.

Don't get me wrong, this was a solid collection of quality stories by names most people would recognize (Stephen King, Clive Barker, Peter Straub, Joyce Carol Oates, Neil Gaiman, George R.R. Martin, Ramsey Cambell, Joe Hill, and a bunch more.) And I should mention that my previously chosen favorite from Year's Best was in here: Pear-Shaped Man, by George R.R. Martin. I didn't want to list it as a favorite again.

As with the other collection, there was nothing I hated. There are some authors I'll look more into. It was a worthy collection, but didn't pack the same punch for me as the last one. It could have been that I wasn't as open to it these last two week's. I think it's time for me to read a novel and take a break from short story collections, as much as I love them. (I have several of this year's collections waiting to be read, too.)

One thing I liked was that Joe Hill closed out the book. Clive Barker opened it, Joe Hill closed it. It felt like the beginning of the new guard. Then again, I have no idea about some of the others included in this, whether they're older or younger than Joe Hill, or whether they've been around longer or less time than him. Of the names I knew, Joe Hill was the newest author, the one that had started making his splash near the end of the two decades covered. I enjoyed the sense of closure that brought me.

The next book I read will be My Soul to Keep, by Tananarive Due. I've been looking forward to reading something by her. But first I'll be reading a book or two that aren't horror, because the rest of my TBR pile is starting to really stack up.

Have you read this collection? How did you like it? What were your favorite stories?

Great review, I'd love to read the story by Joyce Carol Oates, I have several of her books and didn't know she wrote horror. This is a book I'd love to add to my collection! Thanks!

What are the rankings for...favorite reads this season? month? quarter? Just wondering.

Pawesome pawspective in your review, my amazing human friend. I don't read many horror books. Then again, just looking at my human, Gary, inspires me to write a horror book.

I guess you might ask a cat to find its mews...

Reading these first editions of the collections has shown me a bunch of people who write/wrote horror that I had no idea about. It's fantastic!

The rankings are for the books I've read so far from this particular list of books (from the 100 Best Horror list put together by Nightmare.) As I read them, I rank them. Not sure if I'll be able to do that all the way through, because it's getting harder for me to figure out where it should be on the rankings.

My cat has found her mews for sure. And I'm betting she sees all sorts of horrors in this house. ;)