This week I'm reviewing The Damnation Game, by Clive Barker. 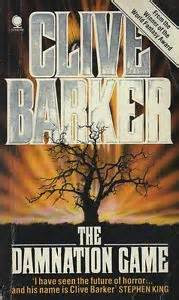 So, hey, first things first: this one was actually horror, which was a refreshing change from some of the books on the list.

To give you a short summary, Martin Strauss is a convict. He gets early parole for becoming the live-in bodyguard of a man named Whitehead. He isn't told what he needs to protect him from, ultimately discovering that the threat isn't wholly mortal. Mamoulian is weak and desperate, but he holds great power, including the ability to raise the dead, and Whitehead owes him a debt.

The characters weren't especially likable, except for the main character, Marty. He wasn't a good guy, but he wasn't a bad guy. He was solid and human, normal. I really only liked one other character, and he made it maybe halfway through. I can't say the other characters were horrible, but they were deeply flawed and selfish. Marty starts out as selfish as the others, but his character grows through the book, which is exactly what they're supposed to do.

Barker gets the reader involved, at first through the mystery of what's going on, and then because you care about certain characters surviving what's coming. I felt like I could tell some things Barker didn't like. Dogs, for instance. I'm pretty sure he doesn't like dogs. All the characters hate dogs (except one), and awful things happen to dogs in the story. Judging by his treatment of religion, I'd say he doesn't think much of that either. And I'm pretty sure he doesn't think much of women, at least not sexually. There was something in the one sex scene in the story that squicked me out; it's still squicking me out. Ew.

One thing I've noticed about Barker is his interest in flesh. Torturing flesh, cutting flesh, rotting flesh, missing flesh. There was plenty of that in this story, but much of the horror was actually supernatural. In fact, there were many elements to the horror in this story, as I sit here thinking about it. Some of them were gross, but some were more mental or emotional in nature.

I mentioned flesh above. When I discussed this with DeAnna, she pointed out to me that she thought it wasn't just flesh, but connections. I continued reading with that in mind, and she was right. Overlooking the physical, connections came up in a lot of ways, with multiple kinds of connections between different characters, for instance, and even the direct act of connecting to each other's minds. Some of the supernatural connections grew with emotional connections. There are historical connections and modern connections. So on and so forth. He interlinks many elements.

As far as his writing, it was more lyrical than I expected. It flowed nicely, and there were many sections I considered writing down. It took awhile for the story to get into the scary stuff, and I wouldn't have minded some of the beginning having been cut out, but I enjoyed it once the pace and tension picked up.

It wasn't my favorite of the books on the list, but it was a good book, with solid horror elements and strong characterizations. There were several truly cringe-worthy scenes, and I was vested in the main character. Not only that, but there were spots where what appeared to be coming made me hesitant to read it while staying at the cabin in Estes Park. I still read it, but I thought twice about it ahead of time. There were also gross out moments that made me lose my appetite. All in all, I liked it.

The next book I read will be The Year's Best Fantasy #1, edited by Ellen Datlow.

Have you read Clive Barker? Are you a fan? Did you notice any ongoing themes or opinions of his? Have you read this book? Would you?