This week I'm reviewing In Silent Graves, by Gary A. Braunbeck. 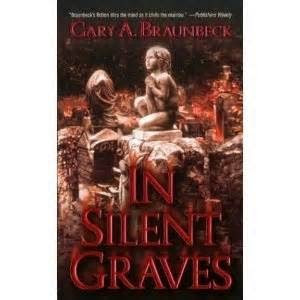 This book started out promptly with a severe loss for the main character. Since it's on the back cover blurb, I'll go ahead and say that his wife and unborn child die. His daughter's body is then stolen from the morgue, and he is haunted by a man with a facial disfigurement.

For a book that is gruesome at times, Braunbeck knows how to wrench the heart. Robert Londrigan is living the high life before he's sent plummeting into a spiral of horror. He has no chance to get over his loss, because he's being haunted by a smartass phantasm with no initial explanation as to why. The last few chapters were surprisingly touching (though also grotesque.) At the heart of the tale is a love story that has spanned a greater time than even Londrigan had imagined.

It slowed down in the middle once it was revealed to the reader what was happening to him and why. There was a mythology introduced that took bits from already existing mythology and expanded on them. Time was twisted and deeper questions were raised than I expected. There was a lot in play in this book, which made it a slower read during the introductions and explanations, and a little confusion at times. But where he went was definitely interesting.

There was character growth for Londrigan as he came to terms with the reality behind the facade he'd been seeing his entire life. He saw what was important to him and actively pursued it. Secondary characters were well developed; there were a few I became fond of.

A few things made me wonder if it was necessary to go there, though what disturbed me most wasn't what disturbed DeAnna most (I haven't spoken with M.B. since I finished it, so I can't say what bothered her.) What I can tell you is that both warned me in advance that there were disgusting and bothersome parts, so I went in prepared.

I can say I think Braunbeck is a good writer. What I can't say, still, is how I felt about the book, though I've tentatively added it to my rankings below, subject to change.

Once again, I'm not sure what my next book will be. This one was steered by having the physical copy on hand. I've run out of books I have possession of from the list, so it's whatever I find next.

Have you read Braunbeck? This book? What's your favorite Braunbeck? If you've read any of the books above, how would you rank them?

Thanks for the review. It sounds like it's not a book for me, but I do find it cool that The Handmaid's Tale is at the top of your list - that's a seriously disturbing book, but not gruesome (or at least not that I remember since I read it before my kids were born).

I've never even heard of Braunbeck! This sounds creepy though, that I may give it a try. I haven't read Handmaid's Tale yet, but it's on my kindle. Waiting. I'm looking forward to reading it soon.
I have accrued a small list of horror books I plan to read in the fall. Classics and other such that people deem truly terrifying. Now, if I can only find that list! :(

I'm neither familiar with the author or the book. But from what you say it does sound strange. Not sure about this one.

Arlee Bird
A to Z Challenge Co-host
Wrote By Rote

It does seem that you've not quite made your mind up over that book. I've never heard of Braunbeck, either. Seems like weirdly gruesome book. I reckon your book rankings will most certainly change.

Definitely not gruesome. It's so understated, yet there's a creeping horror to it when you think about the real world implications. Such a good book! I can't believe it took me so long to discover it.

Oh no! I hope you find it. I'd love to hear what books are on it.

I'm STILL not sure about it! I keep changing it's position on my list.