Horror List Book Review: Those Who Hunt the Night

I know I skipped the Wednesday post, but sometimes it comes down to getting some sleep after a nasty bout of insomnia, or sticking to my blogging schedule. This time I chose sleep. I'll double up on the links next week to make up for it.

I'm reading through three lists of best horror with two friends, posting reviews as we go. (For more information, including a list of the books, see this post.) So far, I've reviewed Poppy Z. Brite's Drawing Blood, Robert McCammon's The Wolf's Hour, Laird Barron's The Imago Sequence, Neil Gaiman's Coraline, Margaret Atwood's The Handmaid's Tale, and Kathe Koja's The Cipher. This week I'm reviewing Those Who Hunt the Night, by Barbara Hambly. 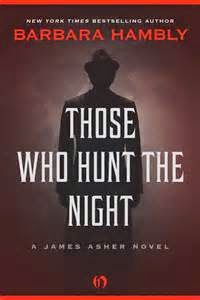 I liked this one. As I started reading it, it felt old fashioned. It was set in England in the time of Queen Victoria, for whom the title character, James Asher, has been a spy. He is simply a professor at a respectable university now, but it seems like the calm life wasn't made for him. He arrives home to find his servants and wife in an unconscious state, a Spanish vampire awaiting him in his office. Of course, he has no knowledge of vampires, not realizing they exist, but Simon Ysidro convinces him, and asks him (in a manner of speaking) to help him with a problem. Someone is killing vampires during the day, rendering them unable to defend themselves. Knowing Asher has no vested interest in keeping vampires alive, Ysidro makes it clear that Asher's wife stands to suffer at his hands if no assistance is provided.

One of the things I liked was that Ysidro wasn't gorgeous. He wasn't romantic. He didn't sparkle. He is pale and quiet, mysterious. And he is deadly, not afraid to feed on anyone at any time, no matter what Asher thinks of it. He is not burdened with much of a conscience. This is simply what he is. He is no monstrous nosferatu, true, but he is cold and calculating, willing to manipulate when he needs to. He's also a gentleman.

Asher, even as he deals with danger from various sides, convinced Ysidro will likely end him as soon as the murderer is caught, is fascinated with what makes vampires tick. He notes behaviors and mannerisms, questions what he sees. He's intelligent and resourceful. Never foolhardy.

His wife, Lydia, is a stunner, a woman of means who married below her station (in her father's eyes). The couple is intellectually matched, with her a physician in a time where that's not a popular or respected choice. She's curious and stoic. And they're quite in love.

In the course of his search, Asher comes into contact with several other vampires. They're not happy Ysidro has exposed their secret to a human. Just as with Ysidro, these vampires aren't attractive; they look like average people. There's a frumpy vampire couple, still the middle aged couple they were when turned. Vampires can compel, and Asher is convinced that vampires fog thinking to make it look like they've suddenly appeared elsewhere. He theorizes that vampirism is a virus.

The atmosphere was perfect. It was reminiscent of Sherlock Holmes. No matter what adventure he was on, Asher kept his educated detachment, analyzing the world around him. Yet he wasn't pompous, something I have a hard time liking in a character. I would have enjoyed more time with Lydia. Really, all of the characters were interesting in their own way.

The setting was well rendered, no matter where they were (they visit Paris, venture into the catacombs.) The amount of research that must have gone into this book was remarkable, yet we aren't beaten about the head with it. Rather, these accurate details are blended into the story. I was particularly interested in the medical practices and beliefs of the time, plus the experiences the vampires had been through in their long lives. Famous fires and religious hunts.

When I looked up Barbara Hambly, it turned out she has a particular interest in history, and has written historical mysteries (which this was, just one with vampires as the victims), as well as fantasy novels. Her writing was well paced and beautifully detailed. It was a pleasure to read, the words flowing forward. The conflict begins right away, with Asher creeping through his home in an attempt to figure out what has happened.

While Ysidro is the type of vampire you shouldn't turn your back on, he grows on you as the book proceeds. One could never fully trust him (unless he had given his word), but his personality slowly comes out, piece by piece, through the course of the book, and a delicate bond is formed between him and Asher.

This is one my top four so far. While it didn't scare me, it was still the type of vampire story I have become accustomed to. A little bit Anne Rice, it's more about the mystery than the horror. The most gruesome detail is the "person" responsible for murdering the vampires, making you question who the real evil beings are, and how far someone will go for their offspring. But I won't say more than that so I don't give anything more away.

I mentioned above that this is in my top four. So far, out of the books I've read, I've really enjoyed The Handmaid's Tale, Coraline, The Wolf's Hour, and now this one. I found The Handmaid's Tale the most chilling. What could be more terrifying than having your rights and life completely stripped from you one day, all because you're a woman? I'd say the order of the books I've read would look something like this, in terms of how much I liked them:

The next book I'll be reviewing is Best New Horror: Volume 1, edited by Stephen Jones and Ramsey Campbell.

Have you read Barbara Hambly before? Which of her genres? How did you like her? Is this a book you might enjoy?

I think I'll put your list on my TBR list. I'm sold on this novel. Thanks for the awesome review, I've been looking for a really good vampire book.

I haven't read this but it sounds really good.

I've been doing a lot of beta reading for others.

I liked the first four. The last three are iffy. I hope you like this one!

I enjoyed it. It was more in line with Anne Rice vampires, so not down and dirty, but not Stephanie Meyer, either.

I hope you've had some good ones!

I've not heard of that one, but it does sound like something I'd like. Thanks for sharing!

Thorough review indeed, sounds like a good one to be read as the mystery unfolds

I've read a Barbra Hambly Star Wars novel many years ago. My favorite of her series is the Silicon Mage series. The cover caught my eye at the library--a wizard sitting in front of a computer. Because there's a lot of technology in parts of it, it's dated, but the story is wonderful. And talk about an unlikely hero. *sighs*

Sorry about the insomnia. I don't read horror but your post now makes me think I should... especially if it is reminiscent of Sherlock Holmes. :-)

This book sounds fascinating. Barbra Hambly also sounds like a great writer. I'll have to check out some of her books, if not this one!

That's quite intriguing, plus I'm a fan of the time period. Gonna check this out. :)

I don't think I've read Barbra Hambly before this, but it sounds like she's an excellent writer. I also found The Handmaid's Tale to be one of the most chilling and disturbing books I've read, ever. It goes far beyond the expectations of horror because it feels so real and the "monsters" are just power hungry people.
Thanks for the review!

Let me know what you think if you read it!

I hadn't heard of the author, either, until that list came out.

I need to check out some of her others.

Oh, interesting! I hadn't heard of that series.

It did make me think of Sherlock Holmes. The setting was well done.

I want to check out some others, as well.

As a fan of the time period, let me know how you like it, David. It's not a time period I read much in.

Yes, Handmaid's Tale was so close to home. What would women do if something like this happened? It really got to me. We look at issues or disparities in other countries, but do we consider how they reached that point? It made me think of the photos that show Muslim women before the Taliban came around, dressed like Americans, holding successful jobs. They surely didn't expect the changes that occurred. It's possible, and that's scary.