Technically, this should have been done last Friday, but I chose to take the full week off, so from here on out, the every other week review post will be every two weeks from this post. 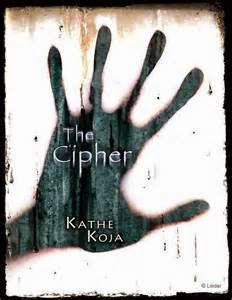 I'm a little mixed in my opinion of this book, which is funny, because there's a foreword that says people either love it or hate it. I don't feel passionately enough about it to love or hate it.

In The Cipher, a couple (using that term loosely) discovers a black hole in a storage room. They name it the Funhole, and begin to experiment with it by dropping things in (a jar of bugs, a rat). When Nick, the POV character, stumbles, his hand goes into the Funhole and something begins to happen to him. A creeping malady that develops bit by bit. Not only a widening miniature Funhole in his own flesh, but a mental change.

First, the pros. I found the story intriguing enough to want to know what this thing was and what would happen to Nick in the end. It became a tale where the main character is trapped in a situation he has created. The narrative style was such that one felt his increasing desperation as the issue unfolded. As he is trapped, so are we. His voice was very stream of consciousness during desperate or confusing times, conversational in the calmer times. It felt like I was sitting across from him in some smoky diner, leaning in to hear what he had to say. I think the writing was good, solid, in that way.

But as I sit here trying to figure out the pros and cons, I find that I have more cons. I didn't find the characters likable, even Nick, really. He was too weak for me to identify with him or really care. If you aren't going to solve a problem, or work to do so, what do I care what happens to you? My interest in how it would turn out for him, as I mentioned above, was not about being invested in him so much as a scientific detachment that made me want to observe what was next. However, Nick is the most likable character other than two secondary characters, Vanese and Randy. Whenever Vanese was there, I felt an odd sort of relief that there was someone with an iota of common sense hanging around. And Randy meant well.

A big issue I had was that the story felt drawn out beyond where it should have ended. It felt like a short story that got stretched out too long, with unnecessary bullying characters thrown in to draw it out. At about 23% (Kindle ebook), I looked at that percentage and wondered what in the world could possibly go on to fill the last 77% of the book. It could have been shrunk down, still covered the important parts, and been an excellent short story.

The other primary character is Nakota. I couldn't stand her. She was strung out, vindictive, an awful person. She, more than anyone else, perpetuated the issues in this book. She was instrumental in trapping Nicholas in the situation. She tormented him then brought in more people to torment him. I was rooting for him to throw her in the Funhole. Please just kill her and be done with this.

As I write it out, I realize it sounds like I didn't like it. But I don't regret having read it. It was a worthwhile story to read, just flawed. The story was basically a slow, queasy, confusing spiral into insanity, and that part was well done. It's not technically insanity, as there is an outside force more than internal, but that's what it feels like. I wanted it to stop. It was like being in a junkie's mind. There was an awful self-destructive force occurring that simply couldn't be escaped. A compelling obsession that couldn't be erased. Certainly, that will stick with me.

And, for the record, the book won a Bram Stoker Award. There's a reason it's on the list, and I do feel it was horror, mostly psychological. At least, it was the psychological aspects that drew me in and interested me. I didn't find the Funhole all that interesting, though it was the cause of everything, the beginning and the end of it all.

What it comes down to is this book was gritty, it was compelling, it sucked me in, but it was flawed in terms of there being characters I could care about and contrived plot points meant to draw the story out.

A warning: the ebook had a ton of typos in it. There were times I questioned whether certain flaws were on purpose, an attempt at something poetic or a halting thought process, or whether they were typos. I still couldn't tell you. The physical book is out of print, but would be an interesting find at a secondhand store.

I think I'll be reading and reviewing Those Who Hunt the Night by Barbara Hambly next.

Have you read Kathe Koja? The Cipher? What did you think? What book of hers do you like best? What type of horror do you enjoy most?

I think I've read enough not-good books lately to want to read a book that you're saying you can't commit to "good" on.

I don't read much horror, though I've read The Handmaid's Tale and didn't really think of it as a horror novel. The Cypher has a concept that intrigues me but the cons you mention turn me off as well. If I don't like characters it's difficult for me to invest myself into them.

Lee
Tossing It Out

I've read books like this; not sure I liked it but didn't regret reading it either. I probably would have skipped a lot of the narrative just to satisfy my curiosity.

I'm the same way about characters, Lee. Something that was a mild exception for me on that was Gone Girl. It sucked me in despite having completely unlikable characters. I couldn't even root for anyone.

I'm terrible at not reading a book once I've started it. It bothers me to not read it through.

Hmmm not sure I'd want to read it if you can't tell the typos are actually typos or for added effect in some way.

This is an extremely thoughtful review. It's too bad the story wasn't shorter. Annoying characters can really ruin a story. The premise sounds awesome, though.

Happy New year Shannon ... I don't read the real dark horror, especially if it involves kids. But I'll watch a horror flick now and then from Amazon Movies.