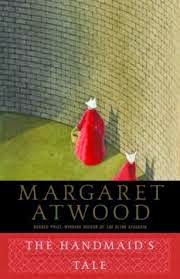 I borrowed this book from the digital library. Since I was just going down my list to see what books they had from it, I didn't bother reading the description of the story. So I was confused at the beginning, but I think it contributed to my dawning horror as I read.

You see, it starts very gently. It seems to be set in the past. Perhaps in a puritan household. I wasn't sure. All I knew was that this woman was not someone from modern times. I was beginning to wonder what form the horror would take in this book. The title certainly didn't make it clear to me.

We follow her through some mundane chores, such as going to a market where, instead of currency, bits of paper with images on them (eggs, chicken) are handed over in exchange for the items pictured on them. The signs outside the stores have no words, only those same images. The POV character has to travel to market with another woman dressed the same as her: simple red dress, white hat with wings. They must walk through checkpoints guarded by heavily armed men.

Wait. Heavily armed men? This can't be set in the past I was thinking of.

The only conversation these women are allowed to carry on is one of simplicity. There is no real exchange of information. Weather and blessings. The POV character is concerned about responding in the correct way. She fears what will happen if she does not. They are being watched.

In fact, all interactions are suffused, filtered, simple, basic. Her very existence is quiet, dull. She's trapped in the house of a man known only as the Commander. Also in that house are the Commander's wife, a male chauffeur, and two women she refers to as Marthas. These Marthas are the women who cook and clean for the household. They actually have individual names, which is more than can be said for our handmaid.

When she meets up with her partner to walk to town, the partner's name is Ofglen, which I at first took to just be an odd name. But then we meet Ofwarren. And we discover our POV character is Offred. These aren't names. These are possessives. These women have been stripped of their names. They have become belongings.

Everyone seems to greet the handmaids with a certain amount of scorn, disdain. The wife of the house resents her. The Marthas are inconvenienced by her presence. The man of the house doesn't speak to her, and the chauffeur isn't allowed to.

The details in this book are insidious. At first they appear to be tame, something from a simpler time. But no, this book is set in the near future, not the past. It shows a dystopian future for women, a massive step backwards. And how this comes about is terrifying in its swiftness and simplicity. This isn't a product of decades, but instead just a few years.

To me, part of the horror of it all was the calm way in which the POV character takes it all. How she expresses the way things are now. The way she takes it with such grace. Eventually, the cracks start to show, and we see the grief, anger, and hope underneath it all. We see the lengths to which women as a whole will go to in order to survive. Their malleability and resourcefulness.

What we also see is how deeply people can delude themselves. How easy it is for an idea to catch on, to seep into people's minds. How an act of such terrifying consequences can slip below the radar and be seen as the right answer. Salvation.

We see how easy it is for women to become possessions, and for everyone to look the other way.

There are a lot of details I'm not putting in here because I think they give away too much of the story. I want anyone reading this to be able to see things develop as I did. To get that creeping sense of repulsion at what has happened to this woman. To be surprised where I was. Part of me wants to lay it all out there, to talk about it. It's a disturbing book in its simplicity. Beautifully woven to allow the horror to seep in, to dawn on you in tiny bits and pieces. To process something you've been reading about in one way and come out the other side where the reality of it awaits. That's the beauty of this novel.

Friends have been telling me I should be reading Margaret Atwood for years. I just never got around to it. I plan on remedying that soon. I've spent more time scrambling to catch up after reading way longer than I intended with this book. It made me hungry for the why and how. As far as action, the pacing is slow, but it doesn't read that way. And for those who don't like monsters or gore, this has none of that. I'd classify it as more dystopian than horror, but I still enjoyed it, and I still found it frightening.

I can certainly see why this one made the list.

I think I'll be reviewing The Cipher, by Kathe Koja next.

Have you read The Handmaid's Tale? Did it make an impression on you? Did you enjoy it or hate it? What other Atwood books would you recommend to someone just discovering her?

Okay, now I want to go back and re-read this one. I read it many years ago, along with Atwood's ALIAS GRACE and THE BLIND ASSASSIN and, if I remember correctly, I really enjoyed them.

You convinced me. I've picked it up and then set it back down a number of times. I didn't realize it was dystopian. I thought it was historical.

I saw the movie long ago, but it didn't leave me wanting to read the book.

I need to read this. I've read other books by Margaret Atwood and boy, does she know how to write a story.

I saw the movie too and was disturbed by it very much. But you make me want to read the book. My thanks!

This one was Atwood at her best! Loved it. Hated it. It made me so uncomfortable that I had to be out of bed and fully dressed while reading it. Yes to this one. Have you tackled Poisonwood Bible? Another one that will rock your socks. Atwood fan here.

I'll have to check out those two!

Let me know what you think if you do pick it back up.

I haven't seen the movie, so I can't compare the two.

She really does, doesn't she? I'm looking forward to reading more by her.

Before these comments, I had no idea there even was a movie. I'll have to look it up and see who's in it.

Lee, I haven't, but I've heard of it. Maybe that will be the next of her books I read. Thanks for the recommendation!