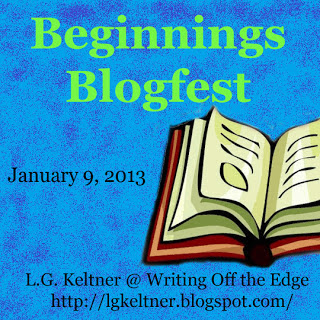 L.G. asked us to write about any beginning we wanted.  There are five billion thoughts that occurred to me, but I thought I'd talk about the beginning of my taking an active part in the writing community, because my blogging beginning is sort of wrapped up in there, too.

This isn't about the beginning of my writing; I'm pretty sure I was doing that in the womb.  Fetal philosophy.  You know, "write what you know" doesn't cover much when you're floating in a bubble.

No, I wrote for ages, but I had no idea there was a writing community out there where I could find support and education.  It wasn't until a friend invited me to a conference (which I didn't go to) that I started becoming aware of what was out there.

She asked me to a local meeting at another point, so I went.  It took a lot for me to do that, as I'm a major introvert, and tend to be anxious about new social situations.  I liked it; everyone was nice and I learned something.  But most of all, I realized there were a bunch of other writers in Colorado Springs, and that there were local resources for us.  They talked about the conference, about NaNoWriMo (which I'd never heard of), about a writer's contest, etc.  Brain overload!

My brain fizzled like that of a malfunctioning Stepford Wife.  I was a bit overwhelmed, but I was also excited.  I started attending regular meetings, signed up for a local writer's group, and finally, attended my first conference.

It was at the conference that I learned that I knew absolutely nothing about publishing, that I had unrealistic views of the business of writing.  And it was at that conference that I heard about platform and blogging, which planted the seed that became The Warrior Muse.

I've posted about the beginning of this blog before, so the short version is that I had no idea what to write about or what to do.  I'd throw up a random post here and there, mostly updates about meetings I went to.

I had no idea what to say, no idea how to get anyone to read the blog (I hadn't told anyone I was even blogging, because I was too insecure about what I was doing).  And then I somehow happened across a post about the upcoming A-to-Z Challenge.  I bookmarked it, but was terrified.

Then one night I looked at my blog and decided I needed to sink or swim, so I opened that bookmarked page, gulped, and filled out the linky list entry.  Then I sat there hyperventilating until I clicked to enter it.  The rest is history.

Thanks for an interesting blogfest, L.G.!

Menacing Hedge is accepting poetry, art and short stories.  They are a quarterly magazine.  "Genres that tickle our fancy are horror, slipstream, magical realism, and science fiction, with styles that lean toward humorous, absurdism, experimental, literary, bizarro, quirky and surreal."

Commentary is always open to submissions of articles or reviews.

Free Spirit Publishing is open for non-fiction book submissions for kids and teens.

The Red Asylum is seeking dark and twisted flash fiction for their 5th edition.  Non-paying at this time, as they are a new magazine.

Grinning Skull Press is open for submissions for an anthology about B-Movie Monsters.  Paying market.  Deadline March 31 or until filled.  Short stories 3000-10,000 words.

Monster Corral is seeking stories about monsters in 2013.  Any genre, as long as there are monsters.  Paying market.

Angelic Knight Press is putting together an Urban Fantasy anthology, and are open to submissions January 15 to May 15.  Short fiction.  Shared royalties.

The London School of Liberal Arts is having a competition.  They want you to tell your story of one thing that needs to change.  Submission deadline is February 28.  Free entry.  Open to everyone.  Cash prize.

Donna B. McNicol is having a scavenger hunt contest for her blogaversary.

Other Items of Interest:

Melissa Maygrove put together a great motivation and resource post for writers.

Chris Winfield posted 92 Ways to Get (and Maximize) Press Coverage.

You can find a free book marketing cheat sheet at William Hertling's Thoughtstream.

One last thing:  Hop on by the A-to-Z Challenge blog for a Post A-to-Z Road Trip update.