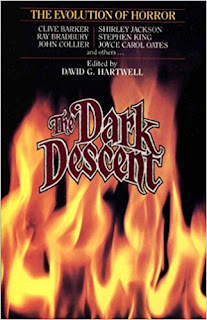 This sucker ran 1011 pages, with the final story going right up to the last page, so it took me awhile to get through it. Although that's also partially due to the fact that many of the stories are older, with slower pacing and more elaborate language, which slowed me down, too.

In this anthology, Hartwell traces the history of horror, with stories going back to the likes of William Faulkner, Walter de la Mare, and Algernon Blackwood. The stories went through the mid-eighties, with stories by Stephen King, Clive Barker, and Dennis Etchison, with many more in between. Instead of going in date order, he split the book into three parts: The Color of Evil, The Medusa in the Shield, and A Fabulous Formless Darkness.

The middle slumped for me, with many of them being older, more literary horror stories. I found that I enjoyed the classic ghost and haunted house stories, but others in that era left me unsatisfied. The other two sections were livelier, and the closing story was a strong finish.

As big as this book was, it would take me forever to do a full, real review of this, so what I'd like to convey, in general, is that this is a magnificent collection of stories to read if you're fond of the horror genre or work within it. I may not have loved every story, but I learned a lot about the history of horror and how it's been shaped and changed through the years. There was a lot more cleverness in some of the older stories compared to the harder twist ending we employ now (though the twist was strong back then, too). I got to read classics I wouldn't have read elsewhere. It was a strong set of stories, and they all deserved a place in the history of horror.

Some of my favorites:

"A Little Something for us Tempunauts," by Philip K. Dick
"The Beckoning Fair One," by Oliver Onions
"What Was It?" by Fitz-James O'Brien
"The Beautiful Stranger," by Shirley Jackson
"The Willows," by Algernon Blackwood
Mackintosh Willy," by Ramsey Campbell
"The Signal Man," by Charles Dickens
"Crouch End," by Stephen King
"Seaton's Aunt," by Walter de la Mare
"The Repairer of Reputations," by Robert W. Chambers
"The Yellow Wallpaper," by Charlotte Perkins
"Born of Man and Woman," by Richard Matheson
"Good Country People," by Flannery O'Connor
"Dread," by Clive Barker
"Josh Charrington's Wedding," by E. Nesbit
"If Damon Comes," by Charles L. Grant
"The Bright Segment," by Theodore Sturgeon
"There's a Long, Long Trail A-Winding," by Russell Kirk
"The Whimper of Whipped Dogs," by Harlan Ellison
"The Summer People," by Shirley Jackson
"The Reach," by Stephen King

I think it would have been nice to have them in date order to really suss out the changes and trends, but with this many stories, it probably made sense to split them out differently. It had to have been quite a job curating all of these stories. Some no longer had copyright, but most did. And I discovered authors I'd heard of, but never really read, who I'd like to read more of.


I'm not sure which book I'll be reviewing next.

Have you read this collection? Are any of these stories familiar to you? Would you read a 1000+ page book of short stories?