This week, I'm reviewing The Ignored, by Bentley Little. 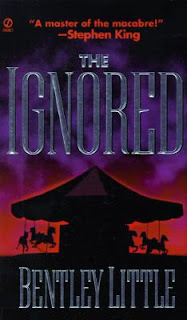 This one gave me a lot of mixed feelings.

I found the idea intriguing, but at times it dragged and felt like the main character was whining endlessly about his own insecurities. And I felt the premise pushed the boundaries too much for me to get behind. Yet I found myself returning to the story each day and having trouble putting the book down, because I wanted to see where Little took it.

The Ignored is about a Bob Jones, a regular schmo. Overlooked by those around us, the only attention he gets is from a boss that seems to have it out for him. He never gets a word in edgewise. No one at work invites him out or talks to him. His job is dull and takes no skill.

His doubts about himself at work extend to his home life, and he starts questioning his significant other's interest in him. Ultimately, he falls in with a crowd of his fellow Ignored, leading to terrorism in an attempt to become visible to society.

Oddly, this story brought to mind the book American Psycho, but combined with Office Space. Instead of discussing the numbness of society and its reliance on consumerism, it addressed feeling lost in life and trying to stand out, plus the generic middle of the road variety of consumerism, where what's readily available is what is pleasing or at least neutral to the average person. Patrick Bateman (American Psycho) disappears behind his grandstanding and brand knowledge (and everyone else's dire self-involvement), despite his violent and narcissistic tendencies, whereas Bob Jones just disappears, because he's every-man. He's nothing. He's forgettable. Given, it turns out there are other reasons for how average Bob Jones is and why he's Ignored, but in general he's representing the average guy, lost in a dead end job, invisible to his peers.

I was unprepared for the fantastical elements that came into play later in this book, so they threw me. Don't let the premise fool you--there is violence and there are weird things that happen. So, while it may sound fairly mundane, it isn't.

The book makes an impact for sure. I imagine I'll keep waffling on how I feel about it for a long time to come. There's no doubt it's skillfully written, though.

Have you ever read The Ignored? How about other works by Bentley Little? Do you ever feel ignored/invisible? Are any of these links of interest? Anything to share?