This week I'm review The Drive-In by Joe R. Lansdale. 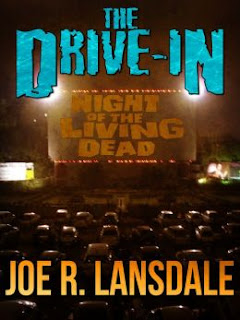 When you scroll down, you'll see that Joe R. Lansdale's The Bottoms is one of my top ten so far in this reading challenge. However, I wasn't overly fond of The Drive-In. I went in prepared to love it, as I love his voice. It just didn't do it for me.

From what I can tell, the primary reason I didn't enjoy it all that much was the fact that I didn't care about the characters. It didn't matter to me. The narrator lost me because he goes into shock and zones out during a portion of the story, and everyone goes off their rockers. In fact, the friend that takes care of the narrator during his shock is the closest I come to caring about anyone. He's a good guy, keeps his head, controls the situation where he can, and lets things go if he can't control them. So I guess I cared about one character.

The Drive-In is about a bunch of people stranded at the drive-in after a freaky comet with a face leaves behind a black substance that surrounds the drive-in like some kind of foam filling agent and burns through anyone that tries to go through it. Chaos ensues, anarchy reigns, and things get crazy.

Super crazy. The Popcorn King is the pinnacle of crazy.

At first, I thought this was going to be a Lord of the Flies-style examination, wherein we observe society breaking down when they realize they only have so much food and they're trapped in this dark world for who knows how long. Perhaps that's why what actually happened didn't appeal to me. I like a bizarro, freaky horror piece as much as the next person (okay, probably more), but I wasn't prepared for it in this case. Perhaps this would have been easily solved had I read the description of the story, but since I've agreed to read this entire list and review it, I usually go in without having read what the story is about. Sometimes this works in my favor. Sometimes it doesn't.

Instead of a gradual breakdown, we speed-surf through the initial breakdown and then we screech to a halt and watch the already crazy antics take place. There are supernatural elements. Aspects of this vaguely reminded me of Stephen King's writing, but they didn't quite fit.


My top ten remains the same.


My next book will be either Bubba Ho-Tep, by Joe R. Lansdale, or Ghost Road Blues, by Johnathon Maberry.