It's Official - Book Tour - Once Upon a Scream

There's a lot of information out there about the Bubonic Plague, aka Black Death. I happened across several places where priests played a part in various aspects. For instance, priests helped to care for those suffering from the plague, and were sometimes responsible for spreading it before realizing they'd been infected.

They were also active in leper colonies during this same time period. This comes into play later.

The plague wiped out a huge portion of the population during that time. Medicine wasn't terribly advanced then, so many things were blamed for the disease killing people left and right. As were many people. Among those people blamed, were lepers and priests. The reason for the lepers being the obvious skin lesions, as the plague also involved lesions. Even people with bad acne were blamed and murdered by terrified citizens.

Of course, we know the plague had to do with disease. And it's prominently thought that trade had more to do with the spread than other means of spreading the wealth. Still, it was the priests who caught my attention. And the poor lepers.

My story, The Black Undeath, is a retelling of Rumpelstiltskin that combines plague, leprosy, and the undead.

Check out this story and others in the new release, Once Upon a Scream, where you'll find all kinds of twisted, dark fairy tales! 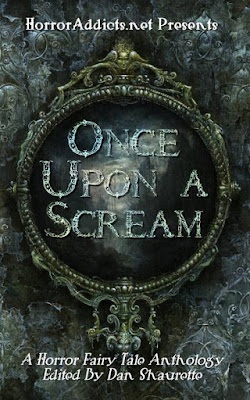 Today's my official day on the book tour run by Horroraddicts.net, the creators of this anthology, but there are plenty of other fantastic authors involved:

This book is available on Amazon in paperback now, but will also be available in e-book in about a week.

If you live near the San Francisco Bay area, Bay Con will feature a panel and release party for this book, with several of the authors, the editor, and staff attending. The party sounds like it will be a great time, and you can get the book signed by the authors who are present, as well as book plates from some who aren't able to make it. There will also be goodie bags!

Unfortunately, I won't be able to be there, but I'll be sending book plates.

Do you have any interesting facts about the Bubonic Plague? What's your favorite fairy tale? Do you prefer them dark, like the original Grimm's Fairy Tales, or light, like the Disney interpretations?