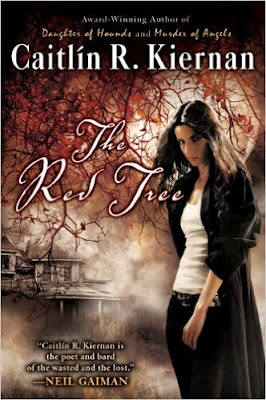 I struggled the entire way through this book. It was obvious Kiernan has writing chops. Yet, I didn't want to finish it.

Quick summary: A writer flees a bad history, including a lover who has committed suicide. She ends up in a small Rhode Island town, renting an isolated farmhouse. She's there to write her next contracted novel. She finds a manuscript about lore surrounding red oaks, like the giant one outside. Bad things happen to people around these trees. Lo and behold, bad things begin to happen to her.

Already, we have the novel about a novelist angle, which can be good when done well, or can be tiresome when done not so well. But it's also a journal, which is not a form of storytelling I'm particularly fond of.

She's entirely unlikable. I cuss like a sailor in real life (though I choose to try to keep it out of my professional world where possible), yet in the first couple chapters, I had been beaten about the head with profanity so much that I started skipping the words mentally. You know, like the word "said." Your mind glides right over it. Much like the word F*** in this book. She's a lesbian, which is great, except that she reminds us constantly that this is so. And don't worry, it helps to meet the F*** quota.

It was supposed to tell us she was a hard ass. A tough woman. Out there. A rebel. Ooooo, a rebel. Whoopty-freakin'-do.

She was a caricature. Profane, rude, whiny, obtuse, self-serving, self-pitying.

A writer who hates her own writing. A writer who hates to have fans approach her, and who is rude to them when they do. The type of writer that acts like the nastier actors, and makes the reader wonder if their favorite author would behave toward them the way this woman does. (As someone who has run writing events, no, your favorite author most likely will not be rude, and will be flattered you want an autograph. Don't be afraid to approach them in a respectful manner unless they're in the middle of something.)

Not only does the character digress constantly, but she TELLS us she digresses constantly. Duh. We noticed. Please stop telling us.

She's pompous. I suspect a thesaurus was consulted regularly in the writing of this novel. Listen, I like big words. I use them naturally, because I've always been a reader. I get it. I do. Sometimes they just come out, because they're familiar. But no, this is more than that.

A second character, a painter, is introduced into the story partway through. Coincidentally, she also enjoys some girl-on-girl shenanigans. She's there to fight constantly with our narrator, to pick at her, and to create sexual tension so we can be reminded that, hey, she's a lesbian!

It is hinted that the narrator is an inconsistent narrator. An untrustworthy one. Oh, who am I kidding. The narrator TELLS us she is untrustworthy. That she is filling in gaps, but that she couldn't possibly have such perfect recall. Blah, blah, blah. We're told this over and over again, too. "Why am I filling in these details? It must be because I'm a writer! My therapist says..."

The story is told as a journal, put together by the editor after the suicide of the author. So we go into this knowing she will have committed suicide. Bye-bye tension. Though, when well done, this could have upped the tension. We could have been wondering how it would happen. If she'd been likable, I would have been desperately hoping until the end that she wouldn't do it this time. But, no, I was just waiting for her to die, because it would mean the story was over.

Not only is it a journal, but she finds a manuscript written by a previous tenant, and starts typing bits of the research from the manuscript, which is nonfiction, into her journal. She feels compelled to do so. The information therein was interesting, but it was sometimes pages of this research, so rather dry. Its sole purpose was to tell us why we should be afraid. To build the nonexistent tension. We're told repeatedly what to expect via the manuscript. And it's all so obvious. Cliche riddled.

Oh yeah, have I mentioned it wasn't scary? Not at all? It's meant to be a slow build, I'm sure. Atmospheric, character driven. Only the character is a shitty person, and the atmosphere was meh. It took way too long to get to a point where it could possibly be scary, and by then I was so over the character that I didn't care what happened to her, or the artist in residence, who was just as unlikable. And the way the "scary" things were thrown out kept them from being creepy at all. The manuscript mentioned it had happened in the past. Therefore, we knew it was going to happen to the characters. Dun, dun, dun!

Please, folks, strong female character does not equal nasty, brash, derisive, holier than thou, and better than everyone else. It means human. Stop making your female characters so over the top so we can pretend we're reading about strong women. Make them real. That would be a nice departure.

I think I'm going to end my review here, because it's going nowhere constructive. I'm disappointed. And frustrated.

But here's the thing. I'd read the author again. This book may have been a fluke. Her actual writing was good. The sentence fluency, the flow. I was bored by this particular story, and I hated the characters (these are not women I would ever choose to be around, that's for sure), but that doesn't mean I wouldn't like one of her other books. This might have been a first book (I don't feel like doing the research to find out for sure). The plotting and pacing needed help. Especially the pacing. There needed to be more focus on the creepy things, the bad things, the things that could be. Instead, we were inside the narrator's head, hearing her annoying thoughts, and wishing she'd shut up, except she was the only one telling the story.

The next book will be The Stranger, by Albert Camus. Fingers crossed.

Have you read Caitlin R. Kiernan? Is there one of hers you'd recommend? Have you read this one? What did you think? How do you define strong female characters?