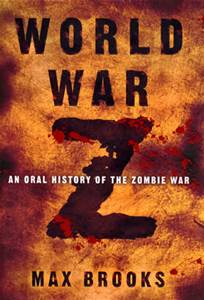 While I found the format and the idea for this intriguing, I didn't end up enjoying it. In fact, it was a little bit of a struggle to get through with my limited reading time.

This story is told as a series of interviews with various survivors of the war, making a lot of them military from different countries. A compelling idea, but I found that the voices blurred together. It's hard to pull off that many characters, so instead of having individual voices, they were cliched in many cases, and often similar.

I was distracted by the fact that out of all these many characters, only five or so were female. It took awhile to get to the first female, to the point that I thought perhaps the story was that all women had been killed in the war somehow. It could be he was wary of accurately portraying a female voice. Whatever the reason, it was something that I found irksome after awhile. Especially when the male voices all started sounding the same.

It was obviously well researched (or so it seems--I didn't fact check). There were some great details that spoke to the locations, characters, careers and such. To me, it was fun to have the whole world involved, though South America's presence was sparse. He theorized how different countries would respond to the same threat, and how the different cultures and laws might complicate things.

There was no classic arc, but the story progressed from the very beginning of the virus, through its development and fighting it, to afterwards. A couple characters were repeated at the end (I think? There were so many characters, but I'm pretty sure we revisited certain characters again), but we didn't overall see character development.

With each section covering a specific time period, there was no real mystery or buildup of tension. The first section I was drawn into was an interview with a military veteran who was caught in a situation where they had to try out old fashioned tactics against enemies that didn't feel fear or pain, and they discovered their weapons weren't working the way they expected. There was finally tension in this section, and I read through that interview quickly.

Another section that interested me was bittersweet, and one of three interviews that hit me emotionally. It was an interview with a Chinese soldier serving on a sub. The commander made the hard decision to disappear into the ocean with his men and any family they could smuggle out, in order to save lives. This was another tense section, and it ended on a sad note.

A lot of the story felt like a commentary on politics, world relations, greed, military ineptness, and more. There was a certain respect for soldiers, but not for those leading them. I'm not big on blatant political commentary in my fiction, but it was well thought out, even if I was quickly over it. This played itself into the horror of the story, especially culturally.

All in all, not a hit for me, but the idea was a good one. The follow through just didn't do it for me, except in some specific interviews featured in the book.

Did you read World War Z? Did you prefer the book or the movie? What about his other zombie book? Is it any good? Which is better?