This week I'm reviewing From the Dust Returned, by Ray Bradbury. 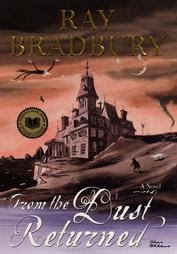 First off, this book isn't horror. I know many of you don't read horror, but this doesn't qualify. It doesn't even pretend to.

I find Ray Bradbury to be a lyrical writer. His word choices, the flow of his writing, the pictures he paints, they're all so delicious that I can feel them in my mouth as if I'm reading aloud, even though I'm not. They have such a substance to them. Sometimes that's a bad thing, because I lose myself in enjoying his wordplay more than the story itself. And sometimes I have to read a sentence over again because the meaning was beyond me at first.

This novel made me think of The Addams Family or The Munsters, and that's what this story is like. It follows a family of misfits, monsters even. Some have been around since King Tut's time. Each family member has their own special ability. One has wings like a bat. One can flutter about the world in other people's bodies, creatures of all kinds, and even dandelion fluff. They take in an orphaned child who is pure human (reminding me even more of The Munsters, but she was a cousin, if I remember correctly.)

There is nothing frightening about this family, despite the fact that they're classic monsters. The story is whimsical. It's a commentary on the changing of time and how it can impact a family. How you can go from great heights to dust. During the time of their origins they were respected and feared, but now people don't believe in them, and they're losing power.

While they need people to believe in them in order to continue on in their existence, they walk a fine line between semi-belief and a belief so thorough that humans will hunt them down. They want people to fear them a little, to believe something bad is possible, but not to come after them with torches a la Frankenstein.

Several chapters felt disjointed from the rest of the novel, as if they'd been written at a different time. They felt like self-contained stories that were related to the rest of the novel, but were somehow apart. Lo and behold, when I got to the end I found a listing of several chapters that had been published as short stories a couple decades before. This didn't ruin the story for me, but it was noticeable and bears mentioning.

This was a quick read, each chapter a story about a different character and the way life had changed for them through the years (decades, centuries). I enjoyed reading it for the beauty of the prose, the pacing was pretty good. While it wasn't action packed, it was brief. There was an arc, but I was still left at the end wondering if there was really a point in having put it together in a novel. It was clear he was fond of this family and these characters, though, and it was a project close to his heart that took a long, long time to complete. If nothing else, it shows how our tastes in horror have changed, and how differently we view monsters now. Vampires are no longer scary. Ghosts are a comfortable presence. Mummies are nothing more than dusty, shambling mumblers.

In short, if you're looking for a fun and fluffy read with lovely language, one that takes you back to fond Halloween memories from your childhood, pick it up and give it a read. If you're looking for a thinking piece or something frightening, this isn't the book for you. I've only read two of his other novels, one of which is also on the list (Something Wicked This Way Comes), and I enjoyed them. He has a wonderful grasp on a boy's childhood in a prettier way than Stephen King (who I also think has such a fantastic grasp on boyhood, but often the darker side of it--and, yes, I'm saying this as a female, so what do I know, right?) This story is no exception, as it follows the young human boy amidst these creatures who make up his family, but it is done in a different way. He's the glue that holds the story together, as well as the beginning and end.

I liked this book, but it didn't belong on this list. Still, I'm ranking by how I like the book, not by how much I agree with its presence on the list.

The next book I'll be reviewing is Blood Meridian, by Cormac McCarthy. If you read my Monday post, you've already gotten a taste of my thoughts on it, but I didn't realize when I wrote it that this book was on one of the two lists I'm doing simultaneously. I was pondering whether I was going to finish it, but now I have to, as I committed myself to getting through these lists. I'll either have plenty more to say, or it will be a brief review.

Are you a Ray Bradbury fan? Have you read this book? What did you think? What is your favorite Bradbury? Do any of the classic monsters still scare you?

I don't think I've read this. Or, if I have, I have completely forgotten it.

My favorite of his is Something Wicked This Way Comes. I remember watching the movie years ago, it was the stuff kids' nightmares are made of.

A quick read by Ray Bradbury that's like the Addams Family is enough to get me to look the book up! Though I can see it being disappointing coming from a pure Horror list. I wonder how Horror readers of its time would view it, much as contemporary Horror fans still see Shaun of the Dead as one of their own despite being part-parody.

It was published in the 2000s. Maybe that's why? I'd only read his older stuff.

That's also my favorite. I had the hardest time seeing Jason Robards elsewhere for awhile.

I'm not sure. It was published in the 2000s, so not terribly old (though single digits--2002? I don't remember for sure). As a horror fan, I'm also a fan of the parodies/horror comedies (Tremors, Cabin in the Woods, Lake Placid.)